Home/News/Ben: “I hope my legacy is yet to come”
Previous Next

From Will Graves at the AP: 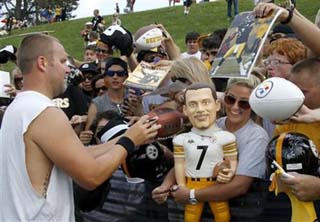 There are days when Ben Roethlisberger can feel every single hit he’s absorbed during a decade as one of the NFL’s most fearless quarterbacks.

And there are days when the Pittsburgh Steelers star sees the young faces surrounding him in the huddle and it seems like he can play forever.

Yet at age 32 with small flecks of gray in his stubble, Roethlisberger knows he’s in the second half of a career that already includes two Super Bowl rings. While he understands the NFL is a business, Roethlisberger has no plans to entertain the idea of taking his business somewhere other than Pittsburgh.

Not now. Not next summer. Not ever if Roethlisberger has his way. And as far as he knows, his boss — Steelers president Art Rooney II — feels the same. Until that changes for either side, concern over his status is nothing more than misguided speculation.

“I have faith that the Steelers will do what we need to do when it’s time and that’s putting people on the field through free agency, trades, draft everything to make us the best team we can possibly be,” Roethlisberger said.

If he sounds like a grown-up, maybe that’s because he is.

The hard-partying 20-something is now a married father of two who takes his son to Pittsburgh Pirates games and is already thinking about where 1-year-old Ben Jr. and infant daughter Baylee, born in March, will one day attend school.

His priorities have changed. His drive has not.

Coming off consecutive 8-8 seasons that at times left him equal parts frustrated and mystified, he is focused but upbeat.

During a meeting Friday night shortly after the Steelers reported for training camp at Saint Vincent College, Roethlisberger made it a point to let his teammates know he hardly views himself as a one-man show.

“I said ‘Listen, there’s going to be a lot of talk about this being Coach Haley’s offense or my offense. This is our offense,'” Roethlisberger said. “It’s not just one person. The ownership is equal for everybody.”

It’s why he spent the offseason working on improving his arm strength even though he is already one of the strongest quarterbacks in the league. Wide receiver Lance Moore likened Roethlisberger’s fastball to the quarterback’s innate sense of “boldness,” a brashness he has now combined with a sense of responsibility.

It’s why even though he laughs about his advancing age on a team in the midst of a youth movement, Roethlisberger hasn’t given much thought to his place in history.

“I hope my legacy is yet to come,” Roethlisberger said. “I hope there’s a lot to be put on that list.”


You can read more from Mr. Graves interview with Ben here.