Home/News/Photos from the “Save Big, Meet Ben” event
Previous Next

#1 Cochran Buick GMC of Robinson has posted many photos from Ben’s appearance on November 14th to their dealership’s Facebook page! 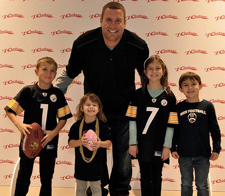 #1 Cochran Buick GM hosted a V.I.P. event on November 14th, 2011, for those customers who purchased a vehicle during the “Save Big, Meet Ben” event.

Although Big Ben broke his thumb only a day before the event, he showed up in great spirits.

He felt badly he couldn’t sign autographs due to his injury, but posed for photographs with all of the guests.

Once his thumb is better, he has promised to personally sign all of the photos which #1 Cochran will then give to the guests to commemorate the event. In addition to meeting Big Ben, guests enjoyed refreshments and were entertained by 93.7 The Fan AND the Steelers’ own Steely McBeam.


You can view all the photos on their Facebook page. 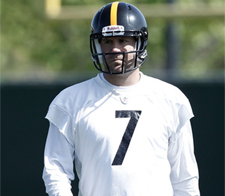 Roethlisberger didn’t take a snap from center during practice on Monday, instead working out of the shotgun and pistol formations to avoid the risk of aggravating the injury.

While he called the thumb painful Roethlisberger insists he should be good to go on Sunday night when the Steelers play at Kansas City. Roethlisberger hurt the thumb in the second half of a win at Cincinnati a couple weeks ago but stayed in the game.

“It hurts first off to just grip the ball,” he said, according to the Pittsburgh Tribune-Review. “It’s something you’ve got to get used to.”

He said coach Mike Tomlin told him not to throw on Monday, “but I was like ‘I want to get some reps, I want to throw some.’ ”

And Ed Bouchette’s interview transcript with Ben at the Pittsburgh Post-Gazette here.