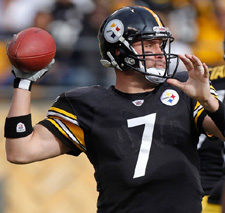 For the second time in three games, the Steelers blew a hole through the playoff hopes of the Cincinnati Bengals, routing them 35-7 today at Heinz Field.

The victory raised the Steelers’ record to 9-3, tied for best in the AFC, Cincinnati, fighting for a wildcard playoff berth, slipped to 7-5.

The Steelers made quick work of this one in the second quarter when they scored 21 points to take a 28-7 halftime lead.

Cincinnati’s only touchdown came in the second quarter, trailing 21-0, when A.J. Green caught an 11-yard pass from rookie Andy Dalton.

Bengals coach Marvin Lewis pulled Dalton from the game in the second quarter. Mike Tomlin took Roethlisberger out with 10:14 to go with Charlie Batch mopping up.

Roethlisberger hit tight end David Johnson for a 9-yard gain early in the fourth quarter on Sunday against Cincinnati, giving him 2,026 completions to pass Hall of Famer Terry Bradshaw’s record.

Roethlisberger finished 15 of 23 for 176 yards and two touchdowns before giving way to Charlie Batch in the fourth quarter with the Steelers holding a sizable lead. He already holds nearly 40 team records and is second in attempts, career passing yards and career passing touchdowns, trailing Bradshaw in each category.

“Ben would be a great quarterback in any era.” — Former NFL quarterback and CBS game announcer Phil Simms, during the 4th Quarter. 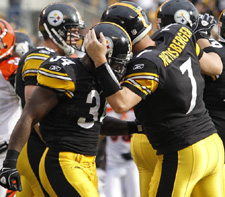 Just in time for the holidays, and the playoff stretch run, the Pittsburgh Steelers gift-wrapped their most complete victory of the season Sunday with a performance that left their two-time championship-winning quarterback wondering if this might be the start of something super.

Pittsburgh (9-3) has won seven of its last eight games and is tied for the division lead with the Baltimore Ravens, who have defeated the Steelers twice this season.

“That was my emphasis on talking with the team and the offense: It is time we play our best football — in all phases,” Steelers quarterback Ben Roethlisberger, who threw two touchdown passes to Mike Wallace and posted a 117.3 rating. “There is no more time for letdowns and wouldas, couldas, shouldas. It’s time to start playing our best football. I hope this is a good start for us. (But) hopefully, we’re not peaking for a couple of weeks yet.”

“For us, it’s taking care of what we can control. That means getting out there every week and giving our best. That’s kind of what we gave them today.” — Ben, on the Steelers playoff picture.

Short week for the Steelers as they take on the Cleveland Browns at home on Thursday night at 8:20 PM on NFL Network!