Home/News/Tuesday: The Best of Ben
Previous Next

“It would be nice to peak somewhere in like early February.” — Ben, as tweeted by Scott Brown, Pittsburgh Tribune-Review.

From the blog of Mike Bires, The Beaver County Times: 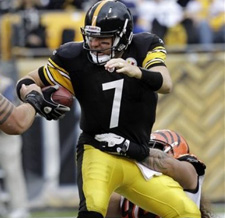 Roethlisberger owns 39 franchise passing records and shares five others. His latest milestone came Sunday when he surpassed Terry Bradshaw for most career completions (2,206).

But that wasn’t the only record Roethlisberger set Sunday. He now holds the dubious record as the Steelers quarterback who’s been sacked most often (308). He surpassed Bradshaw when he was sacked twice by the Bengals. This season, Roethlisberger has been sacked 34 times.

He shares the NFL lead in that category with San Francisco’s Alex Smith. But obviously, Smith and Roethlisberger have fared well despite all the sacks. They rank seventh and eighth, respectively, in the NFL with 94.9 and 93.6 passer ratings. And the 49ers (10-2) have already won the NFC West while the Steelers (9-3) are tied for the best record in the AFC.

What does Ben have to say about the sack record?

From his Q&A with the Pittsburgh Tribune-Review‘s “The Steel Mill” blog:

“I plan for it. At the beginning of the year I put a big number up that I’m trying to get. That speaks to not worrying about it. I don’t go into a game saying ‘OK, I’m going to try not to get sacked this game.’ I go in and play the game the way I know how to play it. I know the line takes a lot of heat for those things but you’d probably cut those sacks in half if wasn’t for the style of game that I play. I think they’re overworrying about it, the media and the fans and people talking about them doing a poor job. I think they’re over it now. My thumb (injury) wasn’t on a sack. The big injuries just seem to happen on regular plays. I don’t think I take too many big shots.”


You can read the rest of his Q&A here.

Ben happy with improvement in the red zone

From the Erie-Times News‘ John Dudley: 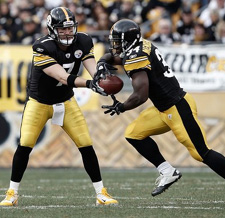 Ben Roethlisberger has no problem with his kicker, but the Steelers quarterback had been seeing too much of Shaun Suisham on the field this season.

So during Sunday’s 35-7 victory over the Cincinnati Bengals, when the Steelers turned four good scoring opportunities into touchdowns instead of field goals, Roethlisberger was happy to see Suisham stay on the sidelines until it was time to kick the extra points.