Home/News/Wednesday: Interview with the media
Previous Next

Highlights from the interview: 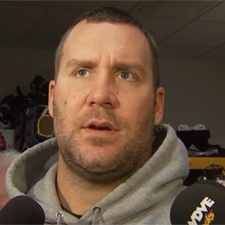 Have the last few weeks given you cause to think about the offseason and the changes the team may make? Also, what has the problem been with the failed comeback attempts?

In the past, I’ve prided myself and our team in the fourth quarter comebacks. We’ve always said you don’t want to have them because then you’re usually not doing so well early-on in the games. But we’ve always been good at it. This year just wasn’t. I don’t think there is a rhyme or reason why. Just was a year where I wasn’t [good]. I don’t think there’s any reason to go panic. I’ve been pretty good for eight years doing it. I had one not-so-good year at it. I felt like I played pretty good football though, other than those situations. There’s not going to be any panic. I know that this offseason, when it gets here, will be a focus on really striving to get better.


Have you found a little perspective in the days since the Bengals game?

A little bit. It’s still pretty tough. I still go over a lot of things in my head but that’s the competitor in me.


Were you still dealing with injury-issues down the stretch here?

I’ll never make excuses. We can talk about that in the offseason maybe. I feel good enough to play.


Have you thought about who may or may not be here next year?

No, because, I know it sounds crazy, but I’m not looking past this game. This game means a lot to me. It means a lot to a lot of the guys in here. I’m not going to quit on this team or the fans because we at least owe that to them, to fight all the way to the finish.


Can you put something on film this week to convince the team to bring certain guys back?

We hope so. We would love to put a good showing out there. I think everyone wants to go out and play their best. Obviously, every year we want to have everybody back. We know that never happens. I think we’ve got a great group of guys and I know who you’re talking about. I hope he’s back.


Why did this team not finish strong this year?

I don’t know. If I knew I think we would have fixed it. I think a lot of it has to do with my play, not playing well down the stretch and fourth quarter drives or last minute throws, just not making it happen. I guess my best is answer to you is probably because I didn’t play well enough.


Are you looking forward to working with Todd Haley and this offense next year?


You can watch video of Ben’s entire interview here.

Congratulations to Heath Miller and Maurkice Pouncey for their selection to the 2013 Pro Bowl!

The Pro Bowl will be played Sunday, January 27, 2013, at Aloha Stadium in Honolulu, Hawaii and televised by NBC at 7 p.m. Eastern. The Pro Bowl squads were selected by a combined voting of fans, players and coaches.

And more congratulations are in order for Heath Miller, named the Steelers 2012 MVP by his teammates!

Congratulations also to both Casey Hampton and Mike Adams who were named the 2012 recipients of the Pittsburgh Chapter of Pro Football Writers of America’s annual award.