(that would be Pizza & Wings!) 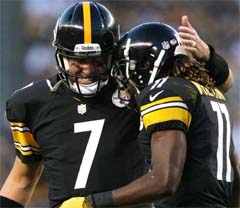 Quarterback Ben Roethlisberger likes what he is seeing from Wheaton who right now is the team’s starter opposite Pro Bowl receiver Antonio Brown.

“He’s learning and growing fast. And we need him to,” said Roethlisberger. “That’s what is great, he doesn’t make the same mistake twice. He is busting his butt every day in practice.

“I grabbed him upstairs and talked to him about something that he did a little wrong in the game. He had nothing to do with the play but he was heartbroken that he screwed something up that he probably shouldn’t have. He puts in that work. He’s watched Antonio and knows what it takes to be a pro.”

Last year wasn’t what Wheaton had hoped from his rookie season, hampered by finger injuries that required surgery. While he played in 12 games, he finished with just six receptions for 64 yards and no touchdowns. But the potential was there, and after a strong offseason was slated as a starter during training camp.

“As of now I am in the position, so it’s my spot to lose,” said Wheaton. “I want to improve on everything so I want to make sure I am capable of holding down the position, that they have full confidence in me when we get out on the field. I still have a week or so to do that.

Pittsburgh Steelers quarterback Ben Roethlisberger turned a question about Martavis Bryant into a challenge for the rookie wide receiver.

“He needs to get in his mind that he can help us and that he’s going to push it hard on every single play like the guys ahead of him are doing,” Roethlisberger said. “If you watch Antonio Brown, he scores on that second play [against the Buffalo Bills last Saturday] because that’s how he practices. Every day in practice when he catches a slant he’s going to score even if guys touch him down.

“That’s how he practices and that’s how he plays and that’s what transitions into big things like that. As a young guy [Bryant] needs to keep learning from the veteran guys, and I think he will do that because he wants to be a great receiver.”

Bryant has all of the physical ability to succeed at this level, and the fourth-round draft pick could give the Steelers’ offense something it has rarely had with Roethlisberger at the controls of it: a tall wideout who can really run.

“What [Bryant] can bring is kind of what Plax did, a big body down the field, guys have to respect that speed,” Roethlisberger said. “I think if he can get to Plax’s level we’ll be happy with that.”

Roethlisberger said Bryant is nowhere close to that yet, which is why he is pushing the Clemson product and not coddling him.

When asked if he would like to get some work with Bryant Thursday night when the Steelers play the Philadelphia Eagles, Roethlisberger said, “He’s got to earn his way up into the first group. We’ve got guys right now ahead of him on the depth chart that are playing at a high level. So he’s really going to have to bust his butt. If he can prove that he deserves to be there then we’ll give him all the reps he wants.” 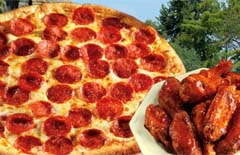 To make sure his new receivers as well as his new running backs and tight ends were up to speed with the no-huddle offense, Roethlisberger created a training camp quiz this summer to test their knowledge. Next week, the top three “losers” must buy pizza and wings for the entire offense.

“I bring the running backs, receivers and tight ends in, and we give them hand signals,” Roethlisberger said. “They have to write down what the play is called and what route they have.”

Roethlisberger would not say who might be buying dinner. He said five players are vying to stay out of the top three. It’s his way of keeping camp interesting while making sure the new guys know the no-huddle’s signals.

“I feel comfortable doing that because I know we’re going to do [the no-huddle] this year and I want guys to be up to speed on it,” he said.

The Steelers will play their third preseason game Thursday night against the Philadelphia Eagles. Roethlisberger expects to play the first half and would like at least one series of no-huddle.

You can also watch video of Ben’s interview here.