I’ve got confidence in the guys. All I’ve got to do is throw it.” — Ben, after the win. 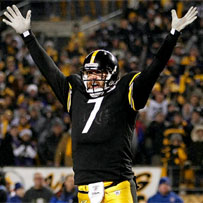 In a play that will go down as one of the biggest in the rich history of the Steelers, Roethlisberger completed a 58-yard pass to rookie Antonio Brown on third-and-19 from the Steeler 39 to set up Rashard Mendhall’s two-yard TD with 1:39 left. The 31-24 win sent the Steelers to their second AFC Championship Game in three years. They will either visit the Patriots or host the Jets.

It was Roethlisberger’s eighth straight win over the Ravens and his third in the post-season and it came on a day where they sacked him six times. But Roethlisberger, who threw for two third quarter TDs, emerged from the backyard brawl whistling again.

“Right now I don’t feel anything but joy!” — Ben, when asked about the “beating” he took during the game.

In a game that looked headed to the first application of the NFL’s new overtime rule, Ben Roethlisberger had other plans.

Roethlisberger’s biggest pass of the day set up a 2-yard touchdown run by Rashard Mendenhall with 1:33 left that gave the Pittsburgh Steelers a 31-24 comeback win over the Baltimore Ravens Sunday in the divisional round of the AFC playoffs.

The win sends Pittsburgh into the AFC title game against either the New England Patriots or the New York Jets, who meet Sunday.

“We’re family. We have been ever since I’ve been here.” — Ben, talking about his team.

From the AP‘s quick game summary:

The Pittsburgh Steelers stood around as the Baltimore Ravens scored an inexplicable first-half touchdown. Then it was the error-prone Ravens who watched helplessly as the team they love to beat most came back to beat them when it mattered most.

The Ravens and Steelers staged another classic game in this heated rivalry, as Pittsburgh overcame a 14-point deficit in the second half. An unbelievable, 58-yard pass on third-and-19 to rookie Antonio Brown proved to be the difference.

“I saw the young fellow just take off, so I’m just going to throw it up for you,” — Ben, referring to the pass to Antonio Brown (who held the ball against his helmet to the Baltimore 4-yard line.

“He’s not picture-perfect out there throwing the football. A lot of his throws that are effective and win games are under duress where he shrugs off, he moves away, and he finds an open receiver and he puts the ball right on the money. So yeah, not picture-perfect. He is remarkably tough, and he plays for the Steelers. People always want to say, ‘It’s about Polamalu it’s about the defense’. It’s always about other factors and not Big Ben, yeah well, the bottom line in that Arizona game in that Super Bowl who brought them down the field when it looked like Kurt Warner and that Arizona team were going to get that game back?

“People want to say he didn’t have a good first Super Bowl, well yeah, he was a rookie quarterback! He had a great first season, and his body of work that year was spectacular.

“I think if you look at Ben, I think the components that you need to be viewed as being an elite quarterback is your ability to carry a team. Well, in Pittsburgh, you don’t have to carry your team. But the bottom line is he deserves to be considered as one of the top 3 quarterbacks in this league! Not top 5, not top 7, but the top 3 quarterbacks in this league! That’s Ben Roethlisberger – it’s not about putting up fantasy points. I was amazed that some people were calling Matt Shaub elite! A good quarterback? Absolutely, but elite? Are you kidding me? You need to get your team to the playoffs and win some playoff games. You can not put any quarterback in the elite status if they haven’t won playoff games….I love Philip Rivers, but whose at home watching the playoffs this weekend?

Congratulations to the Steelers!


Check back tomorrow for more….