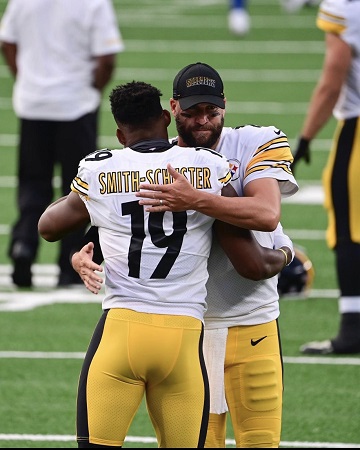 It’s something the Steelers offense hasn’t been able to do the way they would like so far this season, in particular last week against the Bengals when their first two drives were three-and-out, and the third one also a three-play drive, ended by an interception.

Ben Roethlisberger said it’s on him to get the offense going faster, something he admits he was told by his college coaches at Miami (Ohio).

“Traditionally, I’ve never really been a fast kind of start guy. My college coach, Coach (Terry) Hoeppner, used to say the same thing. He would say we have to get you started faster in practices and games. I need to start faster.

“I know the coaches are doing a great job of scripting things, whether it’s screens or getting the ball out. Plays you really like. As an offense we need to start faster, but it starts with me. I need to get better with that because that’s kind of the key to a successful day, starting fast.”

Roethlisberger said he doesn’t know why he starts slow, but that he needs to change it now.

“I wish I knew. It’s been a long time since I’ve had coach tell me those things, but I just got to be better. I don’t want to say we need to start fast. We do. But it starts with the guy who has the ball in his hands.”

It’s easy to say start fast. It’s harder to do sometimes. Roethlisberger is involved with the scripting of the first plays on offense, but it doesn’t always mean it will turn into a fast start.

“I think the way they do the top 10 or the beginning script is each coach kind of picks their 5-10 favorite plays and they kind of talk about it and formulate it and they bring it to me Saturday morning. We look at it and talk about it and make some last-minute tweaks and adjustments.”

Roethlisberger pointed to an array of issues on Sunday against the Bengals that led to the slow start, and the 24-10 loss, but the encouraging thing is he feels they are issues that can be fixed.

“Football is the ultimate team sport. We can sit and look at the performances and we’re only as good as our last one. There were a couple plays here, a couple of plays there. Penalties. Missed throws. Missed catches. Whatever it may be that that kind of hurt us.

“I think the penalties you could talk about. We had some big plays that got called back that would have been sustained drives or got a drive going that they put you behind the chains at first-and-20 or second and whatever. It’s hard to overcome. I think there’s not this one big glaring thing. It’s just a little thing here, a little thing there, which I think is why we can be encouraged as an offense that it’s not that far off.”

One of the aspects that got the offense going in the second half was running the two-minute offense. It was effective, but it’s not something that can be sustained throughout.

“We don’t necessarily have a no-huddle per se that we’ve had in the past where we have 100 plays. We have some plays that we can kind of pick and choose from where we have kind of a two-minute offense. You have to kind of walk a fine line of guys getting tired. Last week when JuJu (Smith-Schuster) got banged up and Diontae (Johnson) was down, we brought Cody (White) in and he did a great job. When guys are getting banged up and we’re getting thin, you have to be careful what you’re doing.

You can watch Ben’s interview here.