“It’s very frustrating to feel like you let down your team and your fans and your coaches. It’s tough. I’m not going to make excuses. I played a bad football game, I turned the ball over and that one’s on me.” — Ben.

“My hat goes off to Roethlisberger. Him playing, hobbled up back there, he wouldn’t come out.” — 49ers defensive end Justin Smith, during interview on ESPN post-game.

From the Pittsburgh Post-Gazette‘s Ron Cook this morning: 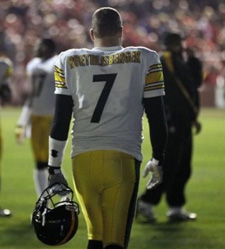 It absolutely was the right call to start quarterback Ben Roethlisberger against the San Francisco 49ers despite a left ankle injury that forced him to miss almost all of the practice time leading up to the game. The Steelers lost, 20-3, in large part because Roethlisberger threw three interceptions and lost a fumble. It was a hurtful defeat that could cost the team the AFC North Division title, the No. 1 seed for the conference playoffs and a trip to its fourth Super Bowl in seven years.

I will write it again:

It wasn’t a bad decision to go with Roethlisberger. It just didn’t work out.


You can read more from Mr. Cook’s column here.

From the Pittsburgh Tribune-Review‘s Scott Brown:

Ben Roethlisberger said he didn’t take any painkilling injections before playing through a high-ankle sprain in a 20-3 loss to the San Francisco 49ers on Monday night.

“We heard that (ESPN analyst) Steve Young and those guys say that before pre-game, ‘Oh, he’ll go shoot it up.’ No we don’t do that,” Roethlisberger said. “They would never put me out there and endanger me or anybody on this team. There was no injection there was two Tylenols and two Advil.”

That Roethlisberger took anything stronger for the pain caused by he injury to hs left ankle was a source of contention in a quiet Steelers’ locker room. As he wrapped Roethlisberger’s foot before the veteran quarterback talked to reporters, Steelers head trainer John Norwig said angrily, “He played without a needle.”

Said Roethlisberger, “I just think it’s silly that they assume that’s what you’ve got to do. Obviously we could have done that and it would have helped a lot but that’s kind of crazy to take that chance because you can further injure yourself.”


You can read more from Mr Brown’s column here.

“I was probably the best 49er tonight”. — Ben, on the interceptions. 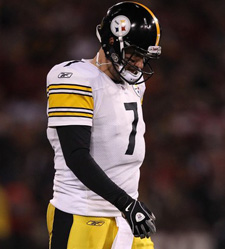 How Roethlisberger can play in pain — without any numbing injections (“There were two Tylenol and two Advils,” he said) — is nothing short of astonishing. To watch him hobble across the locker room with that massive ice wrap around his left ankle was amazing by itself. It should no longer surprise anybody that Roethlisberger plays. Everyone should just be impressed.

Pittsburgh had one of the most consistent offenses over the first 10 games of the season, averaging 22 points per game. Over the last four games, when Roethlisberger has dealt with thumb and ankle injuries, the Steelers have averaged 13 points.

Roethlisberger was considered a game-time decision after practicing on a limited basis Friday and Saturday. When asked about the decision to start Roethlisberger, Tomlin basically said there really wasn’t much of a decision.

“He was deemed healthy enough to play,” Tomlin said. “We always like what Ben provides us, not only from his quality of play but his leadership. This guy is a tremendous competitor. We appreciate his efforts. Obviously, we fell short tonight.”


You can read more from Mr. Hensley’s column here.

“I’m not going to make excuses. I played a bad football game. I turned the ball over and that one is on me.” — Ben.


On a lighter note…video of Ben asking, “Where’s James when we need him?”.