“A lot of times in football games, you have to weather storms. We came out early and we were hot and they weathered our storm. They fought back and they came at us. My mentality is, ‘Let’s weather this storm. It’s not going to last the rest of the game (you hope). Let’s find a way.’

We got in there at halftime and it wasn’t any epic speeches or ‘let’s change this’ offensive mentality or anything like that. Let’s just get back on track. Lets get back out there. Coach said we were going to stay with the no-huddle stuff, so my mindset then is just to think about calls and plays and what they gave us and brainstorming with the other quarterbacks, and the other coaches.

The biggest thing is just not to panic. I felt like second half we were a really good football team – offense and defense and special teams.” — Ben, on losing the lead to the Lions heading into halftime on Sunday. 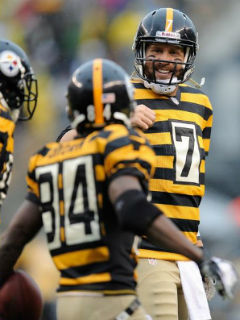 The #1 Cochran Ben Roethlisberger Show features an in-studio visit from the Steelers’ quarterback himself!

Ben breaks down Pittsburgh’s 37-27 win over the Detroit Lions with Vinnie & Cook.

Roethlisberger notes how the no-huddle set the tone for the Steelers’ offense, but also reveals that head coach Mike Tomlin wanted to keep the no-huddle going after Pittsburgh reclaimed a fourth-quarter lead.

“(Tomlin) came right up to me on the sideline right after that and said, ‘When we get the ball back, I’m not sitting on it. You’re staying in no-huddle. I’m not going to play not to lose. We’re staying in this mode,’” Roethlisberger said. “I have to give him a lot of credit for that.”

Ben also admits that this game was bigger than normal for him due to a tumultuous week of reports and rumors.

“I wanted this game, with all the stuff, the reports,” he said. “I’ve been telling you guys, that I’m not quitting. And that was my goal was to go out and play the best I could play and be the best quarterback I could be and to lead this team to victory. It felt good to play a pretty good game and to get a win.”

Was Roethlisberger upset by the reports from NFL Network’s Ian Rapoport?

Ben also describes how the Steelers no-huddle worked against Detroit, and looks ahead to Sunday’s trip to Cleveland.


You can listen to the podcast here (bottom of the page).

Quote of the Week:


“Ben always keeps the same demeanor in the huddle, whether we are up 21 points or down 21 points. He is always the same. You never get a sense of panic or you never feel like you are able to relax because we are up. It’s always the same tone and that helps the offense. That is the right thing to do. He helps me a lot. To have a guy like him back there with me every play, I can always ask him questions. He helps me in the game, in practice. He always keeps me calm and comfortable in the game, and that is what makes a great leader.” — Le’Veon Bell, from an interview with Dejan Kovacevic.