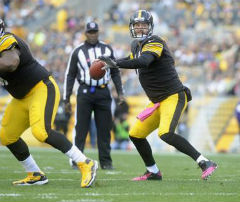 Not only has the offense gained traction, it has also shown an ability to adapt to opposing defenses. Ben says it’s no accident.

Overall, Ben is pleased with the results over the past two games.

The Steelers will face the Oakland Raiders this week without running back Isaac Redman, who was released on Monday.

“We hate to lose a brother and a teammate,” Ben says. “The guy’s been around for such a long time. It was a shock to me. He’s a good player, a good teammate, hard worker. If his health is good, I would bet that he’d be back in the league.”


For Ben’s thoughts on the offensive line, the Wildcat package, the red-zone struggles, and the lengths the NFL is going to preventconcussions, check out the entire interview here!

Ben was a call-in guest on The Rich Eisen Podcast!


You can download and listen to his interview here (at 37:43 into the podcast).