A sit-down with Mr. Rooney

A sit-down with Mr. Rooney

Bob Labriola on the interview with Mr. Rooney:

There are two topics that never fail to energize Steelers fans: running the football, and their favorite team’s quarterback situation.

Of course, we’ll focus on the quarterback situation portion of the interview – 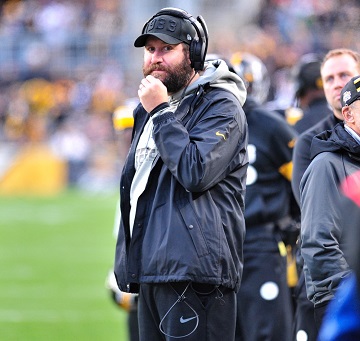 The instability at quarterback was created when Ben Roethlisberger’s right elbow allowed him to play only the first six quarters of the regular season. From there, it was Mason Rudolph as the starter until he was concussed in the fourth game of the season, a loss to the Ravens at Heinz Field. Then it was Devlin Hodges, the survivor of rookie minicamp, then back to Rudolph, then back to Hodges, then back to Rudolph until he was driven into the ground during the Jets game and sustained a rather serious injury to his left shoulder, and then back to Hodges to finish up the season.

If there would be a single statistic to illustrate how strange the Steelers season was with respect to their quarterback situation, there’s this: of the three quarterbacks who started games for the Steelers in 2019: Ben Roethlisberger, Mason Rudolph, and Devlin Hodges, the only one who didn’t lead the team to a victory was Roethlisberger.

Moving forward, it’s fair to link the Steelers’ prospects in 2020 to the health of Roethlisberger’s right arm, and Rooney wasn’t pessimistic at all when asked about his starting quarterback’s prognosis at this stage of the rehabilitation.

“Everything we hear so far is positive, in particular Ben’s attitude about things,” said Rooney. “He seems to feel good about it. He really is still in the early stages of his rehab. He hasn’t been able to do a whole lot yet, but that is going to start to ramp up here over the next couple of months, obviously. We are anxious to see his progress.”

One estimate of when Roethlisberger might be throwing the football again is by OTAs, which typically begin at the end of May, but in the meantime, the NFL will open and progress through the first couple of phases of unrestricted free agency. And it would be during that time when the Steelers presumably would be looking at experienced quarterbacks to add to the depth chart behind Roethlisberger, but Rooney wasn’t certain that was a necessary way to proceed.

“We are still kind of in the process of digesting the season and analyzing what we are doing, where we are going,” said Rooney. “I think as we sit here today, we are all comfortable with Mason being our backup. Speaking of unusual seasons, he had an unusual season. He had to deal with some unusual circumstances, including injuries and everything else. I think it was an experience for him … (you know) the old story, what doesn’t kill you makes you stronger. Hopefully it is that kind of situation for him. I think we are all pretty comfortable with Mason coming back as our backup and being a guy who can continue to develop.”


You can read more from Mr. Rooney here.