…to a special member of Steeler Nation!


“I wanted to do something special for a personal friend of mine – we live in Wisconsin, and my friend, Mike Arntz is a lifelong Steeler fan – pretty tough to do in the land of Cheeseheads (see his pontoon boat). Below is the story describing what he did, donating 70% of his liver for his ailing nephew. In my eyes, Mike is a hero.” — Dr. Kent Vandehaar, Chippewa Falls, WI

From Eric Lindquist, at the Leader-Telegram: 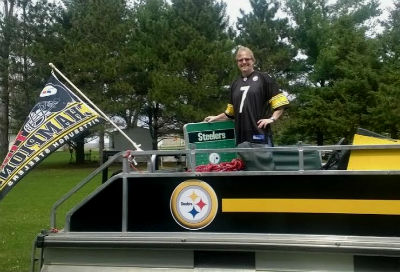 You might say Tyler Grant has a little of his uncle Mike Arntz in him.

And in the case of these two Chippewa Falls men, such an observation goes deeper than just their easygoing personalities or a general family resemblance. It is the literal truth.

Arntz, 48, recently donated about 70 percent of his liver to 22-year-old Tyler, who has struggled with a rare liver disease for much of his life.

“I was amazed that he was willing to do this for me,” Tyler said this week.

Arntz said he thought about getting tested to see if he was a match — the right blood type and liver size are the key requirements — but didn’t act right away.

“Then one day around Christmas, it was weird, I was driving along and it was like somebody smacked me in the forehead and said, ‘You need to call Mayo Clinic today,’ ” Arntz said.

He pulled over to the side of the road, looked up the number on his cellphone and made the call that led to a thorough physical, a battery of tests and, ultimately, to the determination that he was a good candidate for donation.

From that moment on — despite warnings about potential surgical risks, required lifestyle changes and extended time off work — Arntz said he had no second thoughts about moving forward. 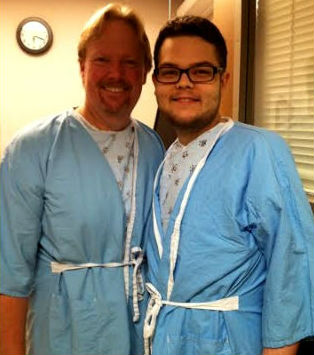 When Mayo doctors asked Arntz if he’d be able to lose 25 pounds and abstain from alcohol for the 3½ months before surgery, he replied simply, “Yeah.”

“I really never had any hesitation about the whole thing,” Arntz said, recalling that he knew it was the right thing to do and imagined the regret he would have felt if he found out later he was a match and anything happened to Tyler while awaiting a deceased donor liver.

Looking forward, Tyler, who will be on anti-rejection medications for the rest of his life, said he wants to go back to college, earn his degree and do something to help others to help repay all the kindness he has been shown.

In pondering what he will say to his uncle when he finally gets to go home in a month or two, Tyler choked up and struggled for the right words beyond just “thank you.”

“Thank you just seems so minute, so insufficient for this huge thing he did for me,” Tyler said. “I just want him to know that I’m eternally grateful. There aren’t any words to say how much gratitude I feel right now and how much I appreciate what he’s done.”


“He had the operation on Good Friday and was home a week later,” said Dr. Vandehaar. “I have known Mike since he was a teenager and was part of our competitive racquetball group. We all still play, and though he recently returned to the sport a couple years ago, he still shows streaks of his high-end talent of his younger days. One of the nicest people you will ever meet and again, a true living hero in my eyes.”


*Thank you to Dr. Vandehaar for sharing this with Steeler Nation! Prayers and best wishes for both Mike and his nephew, Tyler.