From an article this evening by the Mike Bires, at the Beaver County Times: 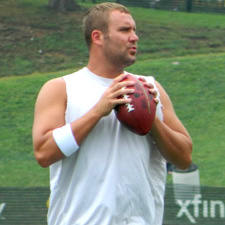 If Ben Roethlisberger called the plays this season, the Steelers’ offense would be called “Air Pittsburgh.”

“We should throw every play,” he said.

Roethlisberger, who’s entering his eighth season, wasn’t totally serious when he made that comment. Obviously, as a quarterback, he’d like to throw the ball as often as possible but he knows that in order to be effective, there has to be some kind of balance between pass and run.

“We have all this talent. We can be as good as we want to be,” he said. “We can run the ball. We can throw the ball. But it’s going to be up to us. Can we identify (opposing defenses)? Can we (pass) protect? Can we open up holes? Can we throw? Can we catch?

“As an offense, we want to score a lot of points and make it easier for our defense,” Roethlisberger said.


You can read more from Mr. Bires column here.

You can watch video of an interview with offensive coordinator Bruce Arians here.

Check out this photo of Ben relaxing in his Da Beard Gear after a tough day of practice!