We start with golfer Brian Cooper, who always takes his love for the Steelers on the course with him! 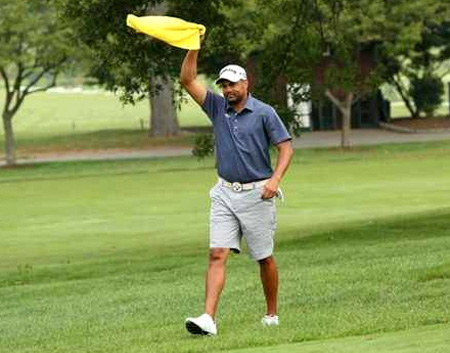 “If you had the chance to watch the Golf Channel‘s series ‘Big Break Greenbrier‘, you would see that I’m very loyal to my roots of being raised in western Pennsylvania. Aside from carrying the Terrible Towel on my bag while filming the show, I also wore a Steelers belt buckle. And it so happens that #7 is my favorite number, making Ben my favorite player. The Steelers are an integral part of that town and I love being part of Steeler Nation.” — Brian Cooper.

You don’t have to be a fan of the game of golf to appreciate Coop’s golf clubs (top of the page)!


You can read more about Coop here.

Derrick Thomas: An all A’s student who is all about #7! 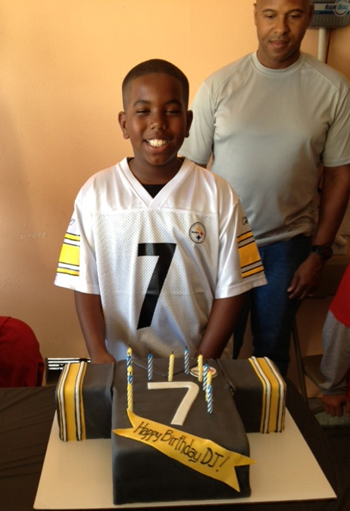 “Derrick is a 12-year old straight A student. He is in 6th grade and has been playing football for 7 years. He one day hopes to be as good a quarterback as Ben! He loves the Steelers and Ben as much as he loves me, his mom! Lol! One day, he hopes to make it to a Steelers game and meet his all-time favorite player, Big Ben, as we live in Oceanside, California.” — Mom Cory Thomas (that’s Dad Dave in the background).


Derrick also sent in a photo of his room, which has it’s share of Big Ben memorabilia! 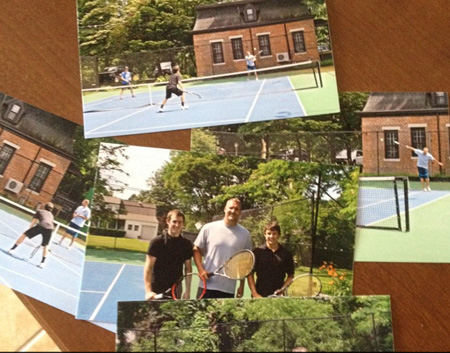 Last June, Mark was staying at the same resort that Ben was staying at during the weekend of The Big 33 Classic in Hershey, PA. He and his friend not only met Ben on the tennis court, but Ben, ever the competitor, and his agent Ryan Tollner, played the boys in doubles for a few matches! Mark tweeted the collage of photos.

Not sure who won the matches, both Mark and Ben remained mum on that subject!

Thank you so much Mark!

And a special Shout-Out today: 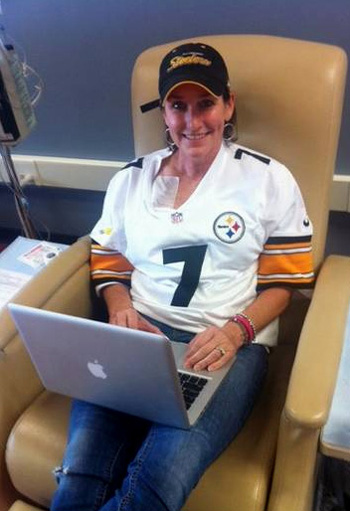 “I am 46 years old and was just diagnosed with breast cancer. I will start chemo next week. That should last 4-6 months, then surgery and radiation. I have no doubt I will beat this. I do not want anything from this website, just wanted to let you know that I will wear my Big Ben #7 jersey to my first chemo treatment…Big Ben has overcome so many obstacles in his personal and professional life…what an inspiration. I will take my next round in my Brett Keisel #99 jersey…big dude…will help me kick cancer’s ass…and the third treatment will be in my Troy #43 jersey…we all need someone to pray for us and I know if he knew me he would say a prayer for me. Then I will start the rounds all over again with Big Ben #7. GOD BLESS STEELER NATION AND GOD BLESS ME!!! All of this will take place in St. Vincent’s hospital in Jacksonville, Florida…Go Steelers!” — Linda Harper, from her email in to us in late March.

As you can see, Linda followed up this week with a photo of herself wearing her Big Ben jersey while getting that first round of chemo! Please keep Linda in your thoughts and prayers, Steeler Nation! Go Linda!!

We have more photos that fans have shared with us over the last month, including a great Steelers man cave, two Shout-Outs to two tough ladies battling cancer, and a photo of Steelers siblings all the way from Aguascalientes, Mexico here.

Also, check out this dog-gone cute four-legged fan in the Steelers Pets album, and then some of the cutest little fans you’ll ever see in the Lil’ Fans album (but watch out, we have a Terrible Toddler on the loose!).