“Ben after 1 month: Good, and getting better”

Home/News/“Ben after 1 month: Good, and getting better”
Previous Next

“Ben after 1 month: Good, and getting better”

Excerpts from an article this evening by AP sports columnist Alan Robinson: 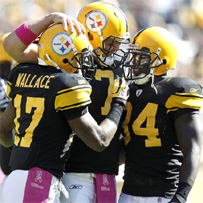 One month after returning to the Pittsburgh Steelers, Ben Roethlisberger is an average quarterback.

By his standards, even if not by anyone else’s.

“I’m leaving plays out there,” said Roethlisberger, who grades his play at about a C. “I think there’s a lot of room for improvement.”

Off the field, the two-time Super Bowl winner is exceeding expectations. Teammates say he’s never looked more energized while going through the daily grind of playing the sport.

The Steelers always liked the quarterback they had before, if not always the person who was that quarterback. They like him even better now. They expect to like him even more before the season ends.

“I’m always going to try to improve, I don’t care if it’s Week 1 or 20,” Roethlisberger said. “There’s some good things and some bad things. I’m just trying to constantly improve.”


You can read the full article here.