“When they called and told me, it was an awesome honor. I am really proud to have graduated. People were laughing because my jersey was already retired. But to be in the Hall of Fame with the people there, it’s a super year. I think it speaks highly of Miami as a university to honor me at the same time of graduation. I think that speaks on how important they think of academics.” — Ben

From Teresa Varley, Steelers.com this afternoon: 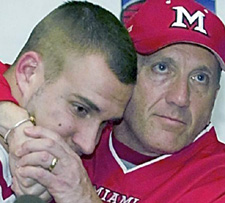 It’s been a big offseason for Steelers quarterback Ben Roethlisberger. First he graduated from Miami University, and now he has been selected as one of six individuals to be inducted into the school’s Athletic Hall of Fame later this year.

What makes the induction really special for Roethlisberger is he is going in the same year as his former coach, the late Terry Hoeppner (photo above). Hoeppner, who died of brain cancer in June, 2007, spent 19 seasons at Miami, and was the head coach during Roethlisberger’s time at the school. Miami had a winning season each of Hoeppner’s six years as the school’s head coach (1999-2004).

“That was the biggest thing for me,” said Roethlisberger of being inducted with Hoeppner. “It’s an honor to go into the Hall of Fame, but to go in with Coach Hoeppner kind of made me tear up a bit and gave me goose bumps. To me that means more than going in myself. It will be an emotional day.”