Ben: ‘I want to be out there with my guys’

Home/News/Ben: ‘I want to be out there with my guys’
Previous Next

Ben: ‘I want to be out there with my guys’

From Teresa Varley, at Steelers.com this afternoon: 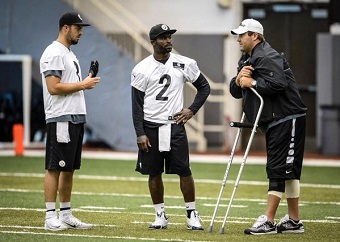 Quarterback Ben Roethlisberger was walking with crutches on Tuesday, but his hope is to ditch them by Thursday so that he can be on the sidelines with his teammates when they take on the Baltimore Ravens at Heinz Field.

Roethlisberger wants to be there to help quarterback Mike Vick, as well as the offensive line in any manner he can.

“I’m trying to convince Coach (Mike) Tomlin to let me be on the sidelines,” said Roethlisberger, who will not require surgery. “I’m still negotiating that with him. He has a no-crutch rule on the sideline, so if I can get rid of these, we will see what happens.

“I want to be there, because I want to be able to communicate with (Mike) and with my line. These are my guys I have known for a long time and have been around. I’m still going to do everything I can to be a leader and be out there for them. If I see something, have to talk to Antonio Brown, Le’Veon Bell, or whoever it may be, I want to be there. If I can help Mike in any way, I would like to do that.”

It’s typical Roethlisberger, who is a competitor and hates that he is sidelined with an MCL sprain, an injury that he doesn’t have a definite timetable that he will return from.

“I’ve been trying to talk to the doctors and trying to drink my milk to get back as fast as I can,” joked Roethlisberger. “It’s one of those things where we have to take it week-by-week. I know I’m out this week and we will reevaluate next week and go from there. There’s no way to put a timetable on it, I don’t think.”

Despite his frustration with not being able to play, he does know it could have been a lot worse.

“You’re always scared about season-ending ACL surgeries and things like that,” said Roethlisberger, who said he is still a little sore. “I felt something. What they concluded was the two bones smacked together, which caused the bone bruise. That was what I felt, the pain I felt.

“The doctor got in and said he thinks he feels the ACL, but still wanted to get an MRI. You still have that little bit of nerves until you get the MRI. Then, he tells you afterwards. Definitely some relief, but still frustrating. The MCL is the issue with stability and the bone bruise is the issue with the pain and dealing with the pain. You guys know me, I can deal with a lot of pain. This was pretty painful.”

Roethlisberger was injured when he was sacked by Rams safety Mark Barron, but said he doesn’t feel like the hit was dirty, but wouldn’t go as far as saying it was a legal hit.

“I think it’s hard, because after watching it on film, the guy fell initially. It’s tough, because you have to ask a guy to try to get back on his feet and try to do something. That’s why I said I don’t think it was dirty. I don’t think he was intentionally trying to hurt me, or anything like that. I just think he was already kind of low and the best way he could go was to lunge for me.”


You can read more from Ben, and see video of his interview here.