Home/News/Ben: “I won’t have to throw for a week or so”
Previous Next

Ben spoke to the media today about his injured thumb: 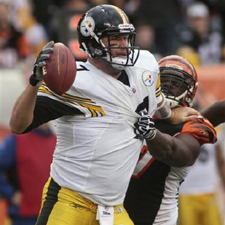 Roethlisberger injured the thumb on his throwing hand sometime during Pittsburgh’s 24-17 win over Cincinnati on Sunday. He’s not sure when it happened, only that he noticed it while coming out for the second half.

“It was hard to determine it on the sideline, but we did all the tests (Monday), and it’s fractured in there,” Roethlisberger said.

Roethlisberger didn’t miss a snap as the Steelers improved to 7-3. He completed 7 of 11 passes for 70 yards in the second half, including a perfect 4-for-4 during the game-winning drive in the third quarter.

“It hurt, but (Steelers head trainer) John Norwig did a great job taping it up, making a quick splint out of tape and going with it,” Roethlisberger said. “Squeezing the ball is the hardest part, but it’s a good thing that I had a glove on it because that helps gripping it a little bit.”

This isn’t the first time Roethlisberger has played with a busted thumb. He suffered a similar injury in 2005, though it didn’t prevent him from leading the Steelers to their fifth Super Bowl title.

There should be no issues this time either, though Roethlisberger will continue to play with a splint. Pittsburgh travels to Kansas City on Nov. 27.

“I won’t have to throw for a week or so, (until) next Wednesday or whenever we practice next week,” Roethlisberger said. “So, that’ll be a good time for it to rest. For me, it’ll just be getting used to throwing with a splint on again and a glove on, which I’ve done before.”

Roethlisberger has been playing some of the best football of his career during Pittsburgh’s surge following a 2-2 start. The Steelers have won five of six going into their bye week despite an inconsistent running game and a defense that’s put up its usual stellar numbers but has struggled to take the ball away.

No matter. Roethlisberger is completing 64 percent of his passes for 1,726 yards and 13 touchdowns against just four interceptions over the last six games and became the first quarterback in team history to top 300 yards in three straight games when he went over the mark against Arizona (361), New England (365) and Baltimore (330).

He discussed the win over the Cincinnati Bengals on Sunday, how good it feels to head into the bye week, and Stanford University quarterback Andrew Luck.


You can listen to his interview here.