Ben: ‘I’m proud to play with these guys’

Home/News/Ben: ‘I’m proud to play with these guys’
Previous Next

Ben: ‘I’m proud to play with these guys’ 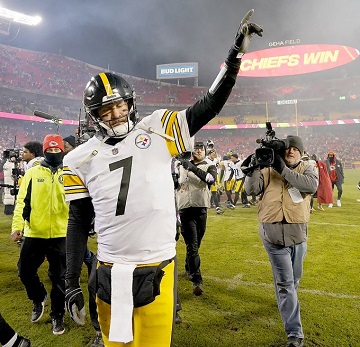 On a night that Ben Roethlisberger wanted nothing more than to deliver another win for Steelers Nation, and just weeks after saying that “all signs are pointing” to it being the final season of his career, he instead was talking about what the season – and the Steelers – meant to him after the 42-21 loss to the Kansas City Chiefs in the Wild Card Round.

“Just a bunch of guys that fought for each other, that fought their butts off and just competed. It wasn’t always pretty, but there are a lot of games that we found a way. I’m so proud of this group of men and the way they fight for each other, for the black and gold, for our fans. It’s just been an honor to play with them.”

Roethlisberger has epitomized what it means to be a member of the Pittsburgh Steelers, is someone who understands the tradition of the organization, and hopes the one thing he has done is pass along that legacy to younger players when talking about the impact he has had on the franchise.

“I’ve been here a long time, and it’s been a lot of fun,” said Roethlisberger. “Like I said, God has blessed me. We joke about the Browns and going there (in the NFL Draft), but it was meant to be that I was going to wear black and gold. Draft day I had a black suit on with a gold tie.

“I’m just so thankful. I hope that that I’m able to pass the legacy of what it is to be a Steeler from Dan Rooney. We all miss him, anyone that knew him misses him. Hopefully I can pass some of that on to some of the guys and they can continue the tradition of what it means to be a Steeler and get passed down.

“Whenever you get a bunch of new guys, once you start to lose some of the old regime if you will, you’ve got to find ways to pass it down. And we’ve got some guys in there that will continue to do that. I gave Cam (Heyward) a big hug and told him it’s on him now. It’s his job to pass it down and to keep teaching and holding guys to the Pittsburgh standard.”

Roethlisberger smiled when asked if the game was tougher than what he thought it would be, knowing that many didn’t even expect the Steelers to make the postseason.

“We thought last week was going to be the end,” said Roethlisberger. “We didn’t know what was going to happen and God blessed me to play another football game. It didn’t end the way we wanted it to. But it’s a blessing to be able to play this game. I try and tell those guys how lucky we are that we get to play football for a living. We need to count our blessings and understand how lucky we are. We’re out there getting beat up and this and that, but we get to entertain millions of fans and throw, catch, run, do what we’ve all done as kids. That’s our job and when we say our prayers thank God for that.

“I don’t know if it’s emotional because it’s the end of the season. I mean, this would be emotional no matter what. We never like to lose and go out and I’ll miss these guys. It’ll probably really hit me come training camp time.”

Roethlisberger said right now he is just looking forward to heading back to Pittsburgh, hoping that the snowstorm hitting the city doesn’t impact the team’s travel plans.

“I get to go home tonight, and we’ve got snow and so the kids are already planning tubing and doing sledding and stuff,” said Roethlisberger. “Being a husband and father, it never takes a day off. You got to keep going. As we move from one chapter to the next, it’s going to be different, but it’s going be fun. It’s going to be a new challenge and I’m looking forward to it.”