Ben is AFC Offensive Player of the Week

Ben is AFC Offensive Player of the Week

Steelers fans have become accustomed to what Ben Roethlisberger can do over the last 17 years, but when he does it in the manner he did against the Cincinnati Bengals, you get a whole new appreciation for it.

Roethlisberger completed 27-of-46 passes (58.7 percent) for 333 yards, adding four touchdowns with no interceptions and a rating of 110.1 in the team’s 36-10 win over the Bengals at Heinz Field. 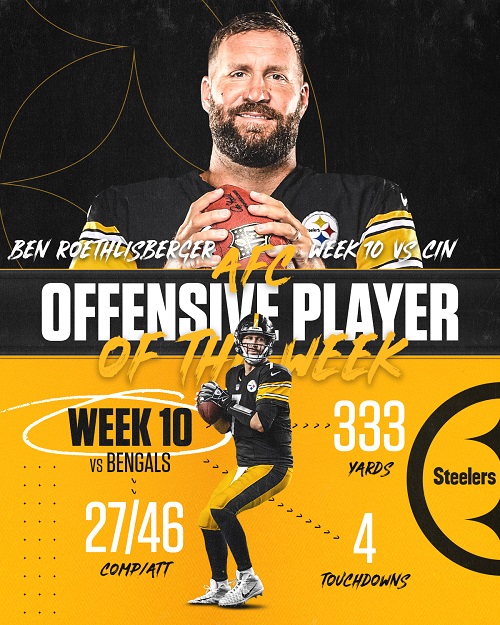 That is why Roethlisberger was named the AFC Offensive Player of the Week, the 18th time he has won the honor in his career.

And the crazy part is, Roethlisberger didn’t even practice all week after he was placed on the Reserve/COVID-19 List on Tuesday, Nov. 10 and wasn’t activated until Saturday, Nov. 14, the day before the game. All he did was take part in the team’s walkthrough on Saturday.

“I attribute it to the guys around me. I attribute it to the offensive line, no sacks. They gave me time to throw it against a lot of crazy looks and blitzes. I attribute it to the coaching staff for getting me ready to play, and all of us ready to play. Then, obviously, the skill guys, they made plays tonight. It wasn’t easy out there. The wind was blowing the football around a little bit, and they were able to concentrate and make plays out there when sometimes plays weren’t even there to be made. JuJu doing what he normally does and fighting for first downs, and James Conner catching the ball, and just everybody. I can’t say enough about everybody. It was way more than me. It was a total team victory.— Ben.

While many might have been concerned about their starting quarterback not practicing all week and then playing, that wasn’t the case with Roethlisberger.

“There was less anxiety in terms of dealing with him in these circumstances maybe than some of the circumstances he and I have been in the past where his health was a factor in terms of availability,” said Coach Mike Tomlin. “His health was not a factor, so we had very little reservations about his ability to perform once we got him to the stadium.”

“Not Ben, just because Ben’s been doing this for a while, going 15 plus years being in the league and doing what Ben does,” said Smith-Schuster of the confidence in Roethlisberger. “For him, it’s more like backyard football being out there and calling the plays, and as you can see there’s series we’ll go no-huddle down the field and put point on the board.”


You can check out some great highlights from Sunday’s game against the Bengals right here. 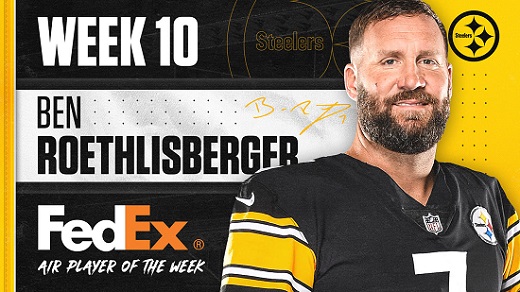 Thank you to everyone who voted!! 🥳