“It wasn’t easy out there, the wind was blowing the football around a little bit…I can’t say enough about everybody today. It was way more than me, it was a total team victory today.” — Ben. 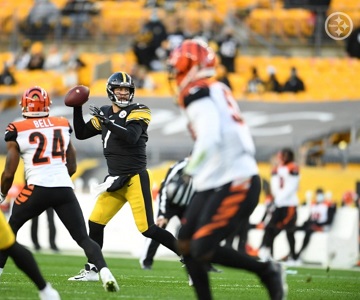 There is no way the game against the Cincinnati Bengals at Heinz Field turns out the way it does without Ben Roethlisberger at quarterback for the Steelers.

Maybe the outcome is the same, but it certainly wouldn’t have been so comfortable.

The Steelers extended their franchise-best winning streak to nine games at the start of a season with a 36-10 victory over the Bengals, and from the standpoint of the offense’s production, it was all Roethlisberger.

He completed 27-of-46 (58.7 percent) for 333 yards, with four touchdowns, no interceptions, and a rating of 110.1. Roethlisberger is the Steelers Digest Player of the Week.


The Steelers have almost as many wins (9) as the ENTIRE NFC East combined (10). pic.twitter.com/K7o8CdwJwt

And with that, enjoy your week Steelers Nation!!