Ben: ‘It’s really hard not being out there’

Home/News/Ben: ‘It’s really hard not being out there’
Previous Next

Ben: ‘It’s really hard not being out there’

“I want to be a part of it. Being hurt is still setting in for me. I’m still feeling like I’m going to come back [this season]. It hurts that I’m not.”

Baker Mayfield led the Browns past the Bills on Sunday. That gave him six wins as a starting quarterback at Cleveland’s FirstEnergy Stadium. He is halfway toward becoming the winningest quarterback at the field, breaking the record of…

Brady Quinn? Bruce Gradkowski? Colt McCoy? No, no and no.

“It’s kind of crazy to think about,” Roethlisberger said, smiling.

Roethlisberger is 11-2-1 at FirstEnergy Stadium. That gives him more wins in Cleveland than any of the 30 quarterbacks the Browns have had since coming back into the NFL in 1999. Derek Anderson is second on the list with 10 wins.

More from Ben, during his One-on-One with Ron Cook on Sunday after the game:

“AFC North football is always fun. Cleveland. A short week. I’m jealous of the guys going over there.”

“I think Mason is doing great. He’s doing some really good things. It doesn’t matter what comes his way. He stays in the pocket when he needs to. He makes plays when he needs to. I think he’s playing awesome. I’m proud of him.”

You can read the rest of the interview here. 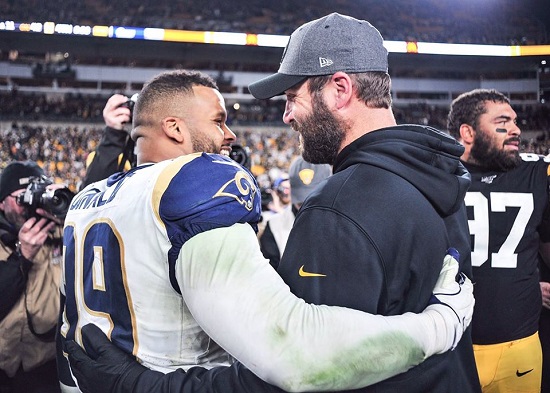 Thank you to our friend, Ed Thompson, who shared another one of his great photos – this one of Ben and Aaron Donald after Sunday’s game!