Home/News/Ben looks ahead
Previous Next

“It’s tough to lose Heath Miller, a guy I think everyone knows is a great friend and one of my favorite, best teammates of all time and a comfort, security blanket for me. It’s going to be tough. It’s not going to feel right going to training camp, or OTAs or minicamps and him not being there. I haven’t quite wrapped my head around what it’s going to be like not having him.

“We have guys that are going to step up. I know Sammie Coates is working his tail off, and really did some good stuff in that playoff game (at Denver). Markus Wheaton has gotten better. We know what we get from A.B. and we hope that there will be maybe a young guy, an Eli (Rodgers), someone that will step up.”

From his interview with Mike Prisuta at Steelers.com: 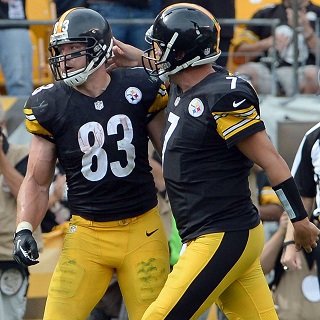 Moving on without Heath Miller is going to take some getting used to for Ben Roethlisberger. Free-agent addition Ladarius Green has already been penciled in to replace Miller.

And Roethlisberger likes what he’s heard regarding the Steelers’ new tight end.

“We’ve talked, we’ve communicated,” he said. “I know some guys for the Chargers that have told me that he’s a really good player and a guy that has more speed at tight end than I’ve ever seen. I’m just excited because I know he’s excited to help us. He wants to win and wants to win right now.”

Roethlisberger and the Steelers won’t exactly be starting over when OTAs commence this month, he said.

But nor should they perceive themselves as a team that was almost good enough to win the Super Bowl last season based on their near-miss in Denver in the postseason.

“You can’t look at the ‘what ifs?’ in football because there’s too many of them,” he said. “We have a good group that’s coming back, a lot of guys coming back, so we’re not really starting from scratch but we’re starting kind of where we always do.”

As for how long he intends to play, “I feel good,” Roethlisberger said. “I feel healthy. Thanks to the guys around me we’ve been playing pretty well. I turned 34 in March. I’m going to play the season at 34 and I’ll be all right.

“Everyone has a different mentality and mindset on it. I’ll stay firm with my answer, that it’s either until Mr. Rooney or the Good Lord says I can’t.”


You can read the latest on the team here.