Home/News/Ben on Brady in Week 1: “If he’s not out there, it’s not the same”
Previous Next 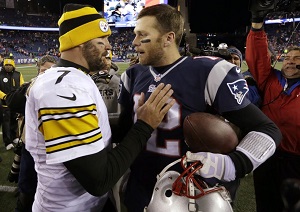 The Patriots-Steelers matchup in Week 1 would be better off with Tom Brady involved, quarterback Ben Roethlisberger said at Tuesday’s session of organized team activities.

Roethlisberger, whose Steelers have faced New England eight times since he was drafted in 2004, jokingly asked if everyone’s sure Brady won’t be in the lineup, a nod to Brady’s looming appeal of his four-game suspension for his role in the Deflategate controversy.

“He’s a guy, I’ve said for a long time, he’s the best in the business, and he proved it again last year winning his fourth [Super Bowl],” Roethlisberger said. “If he’s not out there, it’s not the same. I have a lot of respect for him on the football field and some of the unbelievable things that he’s done. I guess we’ll wait and see what’s finally going to happen.”

You can watch a video interview with Ben from the 1st day of OTA’s here.