Ben: Proud of the fight

Home/News/Ben: Proud of the fight
Previous Next

Ben: Proud of the fight 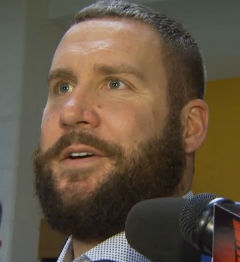 Proud of the fight! Obviously we started really tough, but there was no quit, like we said there wouldn’t be.

I’m really proud of what has happened. We started 0-4 and things aren’t looking so good, and we have one of the worst records in football.

Guys continued to fight and never quit. I will look at satisfaction as happy and proud of the fight and no one quitting.

Just a lot of guys playing really well and stepping up for each other…we were on our fourth center, our line was playing great. I think it’s been great to see everybody kind of grow -whether it’s huddling or not huddling, hurrying up or slowing down – whatever it is it’s just been growth and getting better every week.


You can watch & listen to his interview here (video).


*Steeler Nation – thank you for all your support this season!! Best fans in the world!!