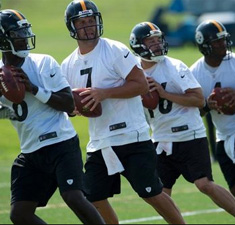 Roger Staubach made five of his six Pro Bowls after 30, and Steve Young helped San Francisco to 10 or more wins five times after he surpassed 30.

And all have the same thing in common — they are all Hall of Fame quarterbacks that took their game to a different level once they turned 30.

“The one who you look at with that is Elway,” said Ben Roethlisberger, who idolized Elway growing up. “Elway won two in his late 30s. He is the one who set the standard.”

Roethlisberger is hoping to be the next one in a line of quarterbacks who transformed from a good everyday quarterback to a Hall-of-Fame caliber quarterback once they turned 30.


You can also check out the latest fan photos from training camp here.


*If you would like to submit your training camp photos, just email them to BigBen7website@gmail.com!