“Roethlisberger is a perfect example of the importance of effectiveness over volume. He’s actually one of the most prolific passers in NFL history if you look at the right numbers.” — Kerry Byrnes, football analyst. 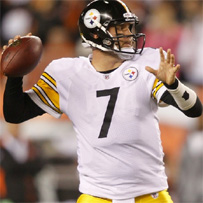 Most football fans and so-called experts obsess over those big gaudy numbers and 400-yard passing days that grab headlines. The fantasy football phenomenon fuels this obsession. But the truth is that passing effectiveness, not volume, is the singular secret to success in the NFL and always has been — at least if you care about wins and losses on the field and not in your fantasy league.

Quarterbacks with a high average per pass attempt almost always win, regardless of how often they pass.

Big Ben averages an incredible 8.02 yards per pass attempt, the fifth highest mark in the history of football. If you want to know why the Steelers instantly became title contenders the day Roethlisberger became the starter, if you want to know why he’s already won two Super Bowls, look at that number.

Sure, he’s been blessed with a consistently strong defense and a team committed to the run. But those two factors don’t win consistently if you can’t exploit the opposition with a highly effective passing game.

Bottom line: passing effectiveness, not passing volume, is what wins games in the NFL. Big Ben is the best contemporary example of this law of football success.


To read the rest of Mr. Byrne’s column here.


*Thank you to Becky for the link!