“Ben Roethlisberger happy to work out of spotlight”

“Ben Roethlisberger happy to work out of spotlight”

“Ben’s at that point in his career where he’s got big-time focus and has an awesome personal life with the growth of his family. He’s just in a good place. We’re expecting big things from him.” — Coach Tomlin 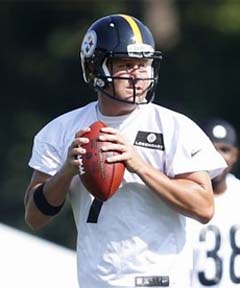 In this summer of Johnny Football, two-time Super Bowl-winning Pittsburgh Steelers quarterback Ben Roethlisberger is somewhat forgotten in the shadow cast by Cleveland Browns rookie national media magnet Johnny Manziel, who has yet to throw a preseason pass.

Roethlisberger shrugs the potential slight off the way he would a blitzer perhaps because he has never worked harder in an offseason to have the best season entering his 11th season.

“It doesn’t bother me because I’d rather slide under the radar,” Roethlisberger told USA TODAY Sports Monday when asked about the spotlight on Manziel. “I’ll let them have all the attention and we’ll just go to work. We just want to be the best team we can be. And we’ve got the them (Cleveland Browns) Week 1.”

Yet Roethlisberger consistently is ranked behind Peyton Manning, Tom Brady, Drew Brees, Aaron Rodgers and others despite owning a 105-51 career record, including 10-4 in the playoffs.

“I don’t think I’ll ever get that credit,” Roethlisberger said. “It will probably be when I’m done. People will look back and say, ‘Wow, he was better than we gave him credit for.’

And check out this video from Ken Laird at TribLIVE Radio, today: