‘Ben Roethlisberger has no doubts he’ll play well upon return’

‘Ben Roethlisberger has no doubts he’ll play well upon return’

“I’ll gradually ramp up the number of days and the throws and the distance and the velocity. I really feel like I could let it rip right now if I had to, but what’s the point? There’s no need for me to rush it.”

From Ron Cook’s interview with #7: 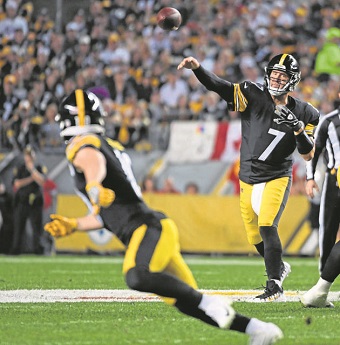 I spent a lot of time this winter wondering what it’s like being Ben Roethlisberger these days.

“There’s pressure, but I put more pressure on myself,” he said Thursday. “As much as the fans and my teammates want me out there, I want to be out there even more. I saw last season what this team is capable of doing. I’m pushing myself to come back better than ever.”

“I have no doubts I’m going to be able to come back and play well — none,” Roethlisberger said. “I have complete confidence in that. I’m throwing without pain for the first time in years. Some games, I would have a little pain. Some games, I would have a lot of pain. But in the New England game and the Seattle game [last season], it got to be too much. To be able to throw without pain now? That feels nice. That’s a nice feeling. I know I’m not getting any younger, but I feel younger because I don’t have any pain.”

Roethlisberger said he will increase his throwing from twice a week to three times a week next week.

“Right now, it’s about 40 throws a day and about 20 yards. I throw from my knees and I throw flat-footed. It’s mainly just about getting my spin back.

“I’ll gradually ramp up the number of days and the throws and the distance and the velocity. I really feel like I could let it rip right now if I had to, but what’s the point? There’s no need for me to rush it. Our goal was for me to be 80, 90, 100% by OTAs and minicamp. Now that it looks like those things are going to be canceled [because of the COVID-19 pandemic], I can take my time a little more.”

Roethlisberger said he threw to teammate Ryan Switzer on Thursday. It gave him a nice lift at a time he’s home-bound like the rest of us.

“He’s in my small Bible study group and he called and asked me if I knew of a gym where he could work out. I told him nothing was open, but I have a gym in my house, so he came over. It was nice throwing to someone besides my trainer.”

Roethlisberger laughed at the idea a lot of Steelers fans are worried about his weight as much as his elbow. They saw him in the video the team posted or saw him courtside at the Kansas-West Virginia basketball game Feb. 12.

“I’ve heard people say I’m fat, and that just blows my mind,” Roethlisberger said. “I’m lighter and in better shape than I was in either of the past two years. I haven’t stopped working out. I normally don’t work out in the offseason, but I’ve been doing everything five days a week with my trainer. Cardio twice a week. Legs twice a week. Upper body twice a week …

“I guess it’s my beard that makes me look heavier. I must have five pounds in that, I know. But I’m not overweight.”

The next question also was obvious.

“I normally don’t have my beard in the offseason, but this is a different offseason. I look at it as my Samson effect. As long as I have it… 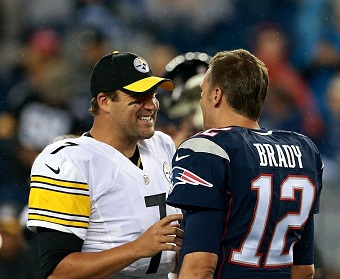 Count Ben Roethlisberger among the many who were surprised when Tom Brady broke up his 20-year marriage with Bill Belichick and left the New England Patriots after six Super Bowl wins to join the Tampa Bay Buccaneers.

With Tampa Bay, Brady will play for Bruce Arians, who was Roethlisberger’s offensive coordinator with the Steelers from 2007-11. Arians and Roethlisberger won a Super Bowl together in 2008 and went to another in 2010. Arians said Roethlisberger was “like a son to me.” Roethlisberger described Arians as “a second father,” prompting Arians to say, “I’m more like his crazy uncle.”

“B.A. is a great quarterbacks coach and a great players’ coach,” Roethlisberger said. “Tom is going to love it there. Talk about going from opposite ends of the spectrum with coaches.”

“I asked him what he’s going to do now that he’s coaching the GOAT.” Roethlisberger said. “He texted right back, ‘Just stay out of his way.’ ”