As he readies for the season, Ben Roethlisberger is doing his best to make sure the rookies surrounding him are ready to be Steelers. 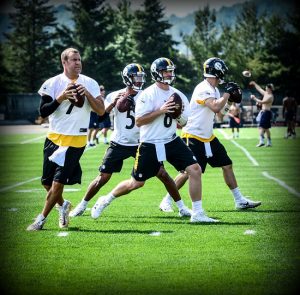 “It was kind of twofold,” Roethlisberger explained regarding how the stalls of outside linebacker T.J. Watt, running back James Conner and wide receiver JuJu Smith-Schuster all wound up in Roethlisberger’s corner of the locker room at the UPMC Rooney Sports Complex. “I wanted the young guys around so I could try and pass on some things that were passed on to me.

“And, they’re rookies so I never anticipated them being at their locker very much, so I get more room.”

Roethlisberger, entering his 14th NFL season, will be playing in his 186th regular-season game when the Steelers visit the Cleveland Browns on Sunday.

Watt, Conner and Smith-Schuster will be appearing in their first.

It’s up to them to know their assignments and their responsibilities.

Roethlisberger has taken it upon himself to make sure the three are up to speed on “Steeler tradition, the Steeler way.

“For T.J. being next to me it’s obviously different,” Roethlisberger continued. “I can’t talk to him about offensive things that I can talk to James and JuJu about. But I want to tell stories about guys I played with, about how we play, how we practice, anything that I picked up along my way.”

Roethlisberger is doing for Watt, Conner and Smith-Schuster what Jerome Bettis once did for a young quarterback from Miami, Ohio.

“I know he did it for a lot of people but he was a guy that I was close to and just enjoyed playing with and passed all those things along to me,” Roethlisberger said.

It’s not all story time this week. 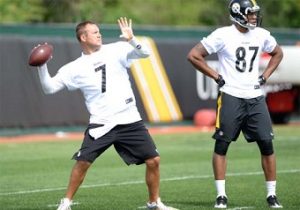 With the regular season days away, Roethlisberger has noticed “the excitement, the attention to detail, the sense of urgency, all those things are turned up a little bit,” in practice.

“You have a game plan,” he said. “The execution is different than just calling a no-huddle play or whatever. You have to be dialed in because it’s a run-pass check. There are just a lot of details that you need to be on.”

“We did some of it today a little bit, asking them who their teams were growing up and things like that,” Roethlisberger said. “They’re young guys that are impressionable and I want to be able to pass on things that were passed on to me.