“I just hope the leaders on both sides find a way to get the most popular sport in America back going. And I hope it’s fair for both sides. People ask when I think it will get done. I have no clue.” — Ben, on the NFL lockout situation. 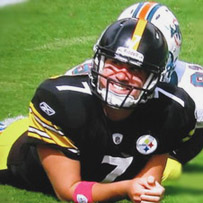 Ben spoke to the Pittsburgh Post-Gazette‘s Ed Bouchette last week about a host of topics, including Steelers offensive coordinator Bruce Arians and their shared “pass more” philosophy, his enjoyment of the no-huddle offense, his views on the lockout as well as the upcoming draft, the NFL’s new rules, and of course, the performance of teammate Hines Ward on ABC’s “Dancing with the Stars”.


You can read the entire interview in the Sunday edition here.


You can also listen to audio of Ed’s chat about his interview with Ben here.