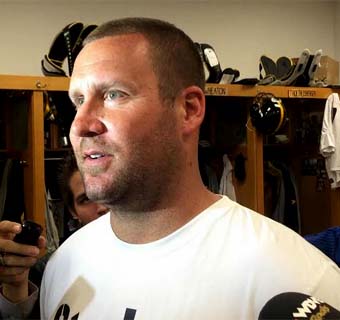 Camp preview – The Steelers hit the field on Tuesday for the first day of their mandatory three-day minicamp, and quarterback Ben Roethlisberger said it’s the perfect warmup for training camp at Saint Vincent College later this summer.


“I think we should go for it every time. Why not? If we do it every day and are 50%, if you don’t make the first and make the second, there are your 14 points. Why not give it a shot?”

Roethlisberger said Coach Mike Tomlin brought the idea of going for two more frequently to him, so he is on board with increasing the number of opportunities.


“We had a game plan going into every game [last year]. I think a lot depends on the team we are playing. What kind of team are they? Where are we, what environments and elements? I wouldn’t be surprised if we go for it even more than last year.”

Dual backs – A potential threat if they go for two would be having running backs Le’Veon Bell and DeAngelo Williams on the field at the same time, something that didn’t happen last year because of a season-ending injury to Bell.


“That was something that we talked about last year and unfortunately we didn’t get a chance to do it. I think that that could be a weapon for us out on the field in some two-minute stuff to have both of them out on the field.”

Driving the car – The Steelers signed tight end Ladarius Green this offseason, but so far the unrestricted free agent has been limited in his on-field work. Roethlisberger has been joking with him about his inactivity, but said he really is anxious to see him at work.


“I am excited once I get him on the field to see what he can do. I always joke with him that you are like that brand new Ferrari that I have that is in the impound lot and we are just looking through the fence at. He has been communicating a lot, talking, into everything from a mental side. Excited about what he can bring when he gets on the field.”

Confidence boost – Quarterback Landry Jones has stated that the playing time he got last year definitely helped boost his confidence, and Roethlisberger has definitely taken notice.


“He has always been really smart. He knows the playbook, knows what is going on. But to be able to be on the football field and actually be under fire is a big difference. For him to get that experience last year really paid off for him.”

Young guns – He didn’t mention names, didn’t give individual praise, but Roethlisberger does like what some of the young receivers are doing so far, even if it is very early in the process.


“I always hesitate to talk too much about young guys because it’s early. There are no pads on. I don’t want anybody to get a big head early when the old quarterback starts talking about them. But there are some guys that are doing some really good things that just need to keep it up and step up and take it to the next level.”

Ageless wonder – While Roethlisberger is quiet on the young guys, he isn’t afraid to speak out about 38-year old linebacker James Harrison.

“He is the ageless wonder. I don’t know if he ever will be done. He might outlast us all. At his age he is not just hanging on, he is thriving.”


You can read more & see video of Ben’s interview here.

And from Jeremy Fowler’s report at ESPN.com: 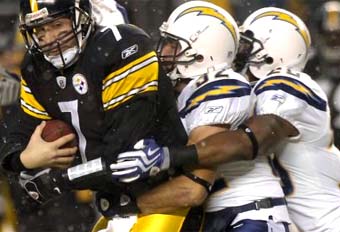 That was before Weddle signed with the AFC North rival Baltimore Ravens on a four-year deal.

“The other day [Weddle] texted me and said, ‘We don’t talk anymore now?'” Roethlisberger said with a smile. “It’s a little different, but he’s still a good friend.”

The Steelers were considered one of four teams courting then-free agent Weddle, a former Pro Bowler who got $13 million guaranteed from Baltimore. In the end, the Steelers never made a big enough offer to sway Weddle. But that didn’t stop Roethlisberger from trying to recruit him.

“Absolutely — that was no playfulness, I was trying to get him here,” Roethlisberger said. “That would have been good for us. Now, he’s the enemy.”