It might not have been the podcast you would have expected to hear Ben Roethlisberger on, but when he joined ‘Along for the Ride with Andrea Fappani,‘ the quarterback was laid back and relaxed, talking everything from horses to Super Bowls to Maurkice Pouncey to his future beyond football.

Fappani, who was born in Italy, is a staple in the National Reining Horse Association and has become one of the all-time leading trainers in the Performance Horse industry. He normally talks with people involved in the business on the podcast, but with Roethlisberger’s love of horses, it was a fun way to reach out to a new audience.

Roethlisberger started riding horses as a kid with his late mother, Ida, but after her passing he stopped and took almost a 30-year hiatus from it.

“I have other hobbies, and they all pertain to outdoors,” said Roethlisberger. “I love to golf. I love to hunt and fish. We have dogs. I am a big animal person. When I was younger, I grew up on horses. My mom, we had a few horses. We’d go riding. It was just trail riding. Some of my earliest memories, my mom passed away when I was eight years old, all of my horse riding was before that. I remember getting on the back of a horse and him swimming across a river and my feet being out of the stirrups trying not to get wet. Riding across a field when you came to open meadows.

“The little bit of rodeoing I did was at a young age. They would put balloons on the back of the saddle, and you would try and pop other people’s balloons and the last man standing with the balloons won. When she passed away, I didn’t do anything for about 30 years.” 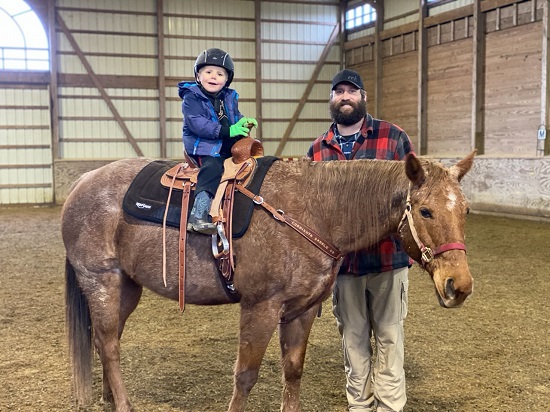 He got back on a horse when he went to visit former teammate Brett Keisel in Wyoming on a fishing trip and said that sparked something in him. His current home is close to a horse farm, where he takes his kids to see the horses.

“That turned into me wanting to do this again,” said Roethlisberger. “Since then, we got a handful of horses ourselves and we love doing it.”

After they chatted horses, and much more, the conversation did turn to football. And one of the most poignant topics was the retirement of center Maurkice Pouncey, who lined up under center for a good portion of Roethlisberger’s career.

“That was one of the hardest things,” said Roethlisberger. “We were together 11 years. Probably the greatest teammate I ever played with. I think he is the best that has ever played the position. We have such a chemistry, relationship. We are good friends. I was debating on whether I was going to come back this year, and once he retired, I was like I don’t know if I want to play without him. I still have a love for it and gas left in the tank, so I want to give it another shot. It’s not going to be the same without him. That is one of the biggest killers going into this year, not having that guy with me because he is the best.”

Another topic Roethlisberger dove into was leadership, and how when he arrived with the Steelers as a much-heralded first-round draft pick he didn’t have to step right into that leadership role because the team was loaded with veterans who made it possible for him to ease into that role.

“We had guys on that team that were veteran leaders, that were the voices, that kept me from having to come right in and say this is my team, this is how I do it,” said Roethlisberger. “I think that is one of the key things to being a leader, knowing who you have around you, knowing how to speak to guys, how to motivate guys, how to communicate to guys. I learned that as I got older. Each guy needs to be led, communicated differently. If I would have come in hollering like this is my team, I don’t know what would have happened. They would have probably put me in my place quick because they were older. I didn’t have to do that early on but learned how to do that in my career.”

You can listen to the full podcast here: Ben joins ‘Along for the Ride with Andrea Fappani.’