“My biggest thing is I always say I emphasize three things – teamwork, sportsmanship and having fun. So, to me, that’s what it’s about and as I ride by the kids are all waving and stuff and I try to get them to keep focused on football, but really they are out here having fun.” — Ben 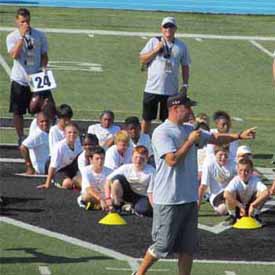 Hundreds of kids spent the day passing and catching and learning the ropes of football.

Their coach, Ben Roethlisberger, is one of the best in the business.

“It’s a lot of fun. This is my fifth year coming. I’ve been here every year and it’s always been really exciting,” one camper said.

More than 500 kids were having a blast while learning about football. From passing and catching to different drills the young athletes worked hard.

“We try and keep it to offense obviously, but I just saw some kids doing a toss sweep, learning how to run the ball, some wide receiver drills and obviously quarterback drills,” Roethlisberger said.

The kids were divided into teams and local high school coaches worked one-on-one with the first through eighth graders.

Ben makes the rounds and stops by each group to offer advice and teaching techniques. By the end of camp, each kid will have the opportunity to catch a pass from the quarterback.

Though, Ben is riding around on a bicycle, instead of walking because his right knee is still recovering after surgery.

“Doing good. I’m just getting around a lot better on a bike so I can get around faster, so I can get to more kids,” Roethlisberger said.

The first day of Big Ben’s Football Camp is over, and we’ve already received many photos and comments from parents and other family members who were in attendance watching their excited youngsters on the field with #7: 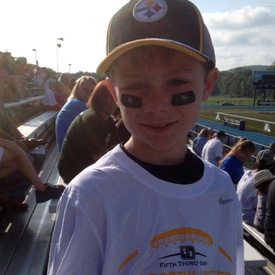 “I just talked to Jackson and he had a blast!! He said it was ‘Awesome’ and that Big Ben gave him a high five – on Jackson’s right hand (he reminded me that is HIS throwing arm) haha. My dad said he saw Ben all morning on the field. I can tell you that with all that excitement from Jackson, I can only imagine it combined between all the kids. How cool!” — Erin Ritter

“Thanks Ben for being so good with the Kids!! Love my Steelers!!” — Michela Woofter

“We were there today and our son had a blast! He can’t wait for tomorrow! Great camp Ben!” — Jamie Landry

“I must say I am a big Ben Roethlisberger fan now (I was before but he’s got me after today). He interacted with all kids at camp throughout the event and walked around to all groups, even with his knee injury. He was heard all day saying ‘great catch’, ‘good throw’, ‘nice hustle’, etc. to the campers. He answered questions they had, threw some passes and even participated in a few plays. What a great role model for all the kids. On a side note, the song ‘Gangham style’ was playing over the loudspeaker by the camp staff and Ben told them that was not to be played at his camp; I appreciate that he immediately addressed the song. As a school principal, I understand it’s seen as a fun song to all the kids but if you listen to the lyrics it’s not appropriate for the young ones. Bravo to him for catching it and everything else he did today. He’s a class act and one I’m glad my boys look up to. I’m off to buy my Roethlisberger jersey now! Thanks!” — Stacey Clark, mother of camper Zachary Fuska 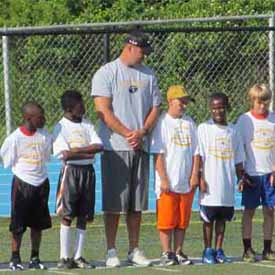 “My son Maddox Koser attended the camp. His dad Bart asked him which drill he liked the best and his response was ALL OF THEM!” — Danielle Koser, Shamokin/Coal Township, PA


“Awesome camp, my son is six and very promising with his athletic ability and desire to compete. This camp has helped him so much. We came from southern West Virginia to the camp and will return next year!” — Britt Beasley


“My son had a great time at camp today! Very well organized and professional. Can’t wait till tomorrow!” — Lori Marshall

“My son hasn’t stopped talking about it, we are here in the ‘burgh for the camp from Northern Virginia. Ben is a great host. Thank you for making Hunter’s year!” — Ryan Myers

“My son, Ryan Landry is 7-years old! He was so excited to get to camp this morning that he was up and ready to go at 5:30am! He absolutely loved his first day! He loves the coaches and his teammates! He was in awe that he was playing football on the same field as Ben! What a great camp for the kids, very organized and fun for everyone! He can’t wait for tomorrow! Thank you for a great experience!” — Jamie Landry 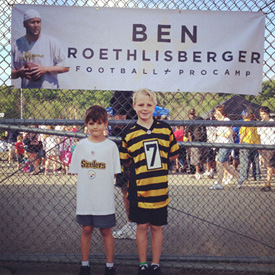 
“I can’t believe the first day of Ben’s camp has come and gone already!! But, it was a beautiful day, good weather and a full camp…kids as far as you could see! LOL! Poor Ben, though, still has his knee all bandaged up so he divided his time around being on foot, on a bicycle and in a golf cart. But nothing seemed to slow him down! Actually he was able to get around to see all the kids playing their 7 or 7 games even faster being in the cart. At one point, I was standing in the field taking pictures of my grandson and suddenly there was Ben, driving right behind me in the golf cart. He probably wasn’t 5 feet away as he came from behind and around to my side before he was off again!” — Anita Doddroe

“Ben said ‘Hi’, shook Dylan’s hand and called him ‘Little Troy’. Made his whole trip!!” — Erik Vasquez, whose son does look like a mini-Troy!

“Carter Lutz had a blast at camp today and can’t wait until tomorrow!” — Tara Lutz 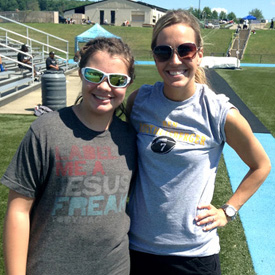 “It was so exciting to meet Ashley and Benjamin, Jr.! We also got to say ‘hi’ to Ben as he drove by on the golf cart!! — Camryn “Cami” Marshall


“Kids are having a blast !! Looking forward to tomorrow!” — Cress Sowry

“What an amazing experience this camp has been for both my sons…their Dad, CDR Mark Ziegler, is serving our country in Afghanistan and had given them the Camp as a gift for their birthdays…Mark was able to view the video and must have watched it at least a hundred times…proud Dad!!” — Dena Ziegler