“My boys had a great time today at camp! My youngest getting to ask Ben a question and my oldest son Andrew catching a 50 yard bomb over the outside shoulder made for lifelong memories. I wish I was there to see it in person, but through the wonders of YouTube, I was able to watch it from Afghanistan. I hope Paul Chryst and Todd Haley were watching!

Thank you to Ben, Ben’s family, and all those who work so hard to put on the camp. You made two, no 500+, kid’s day! My wife and I are touched, almost to tears, by the gesture. Here We Go Steelers, Here We Go…and Go Big Ben!” — CDR Mark Ziegler, SC,USN; to the website’s Facebook page this afternoon. 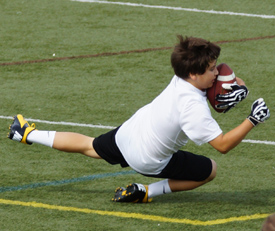 Passes come fast and furious, and so do catches, at Ben Roethlisberger’s Football Camp. Among the campers are Andrew Ziegler and his brother, Steven, courtesy of their father, Navy Commander Mark Ziegler.

“My husband is currently stationed in Afghanistan,” says his wife, Dena. “And he gave the kids the gift of Ben’s camp for something to look forward to while he was away. And today is Steven’s 12th birthday.”

“So I ended up reading that,” Roethlisberger says. “So I called them out today, and today happens to be his brother’s birthday as well. So we sent them both deep, and I had his mom come down so she good get good footage and send it to their dad in Afghanistan. So it all worked out really great.”

Andrew sprinted down the sideline, as Mom shoots the video. Other campers cheer as he makes the catch.

“It’s the best feeling in the world,” the boy says afterward. “He’s my hero. I didn’t dream of it happening.”

Then it’s his younger brother’s turn. A big stretch, and Steven comes down with the ball.

“He threw a perfect pass, and it was my job as a receiver to catch a perfect pass,” Steven says. Speaking of his dad, he adds, “I’m really excited for him to see it, because he’s my dad and he’s serving in Afghanistan , and I just want him to see the moments we’ve had.”

Dena Ziegler sums it up: “It’s just something they will treasure for the rest of their lives.”

You can also see video of the Ziegler Family’s amazing day at Steelers.com here.

“Ben – THANK YOU so much for what you did at camp today for my two sons…making Steven’s 12th Birthday ‘the best birthday EVER’ and for giving Andrew the opportunity to make those great catches! Being a military kid and being away from their Dad hasn’t been easy, but you really made a difference in their lives today. Words alone cannot express the gratitude we feel. Thank you Ben!” — Dena M. Ziegler, via Facebook this evening.

Reflections from other parents in attendance at Day 2 of Big Ben’s Camp: 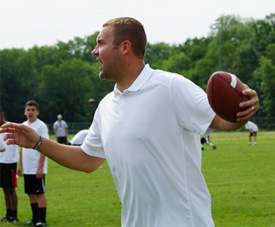 “How awesome is @_BigBen7? Recognized and threw passes to two very special boys who’s dad is serving in Afghanistan. Way to give back Ben.” — Erik Vasquez, via Twitter this afternoon.


“508 passes, can’t believe Ben threw to everyone. He was always my families favorite player so this week! Has been awesome.” — Ryan Myers


“Thanks for the great camp! My son loved it. Ben spent a lot of time with the kids. Awesome!!!!” — Diane Emory

“A most awesome group of Champions, 4sure 4real 4ever Black & Gold!!” — Valerie Jean Miller, on the hard working campers.

“Ben has done a fantastic job with the kids again today!” — Brian Skripac, via Twitter.


“Bens camp & his presence there exceeded our camp expectations! My nephew caught Ben’s pass. That’s a memory he will have forever! Thanks Ben!” — Bethany Laube 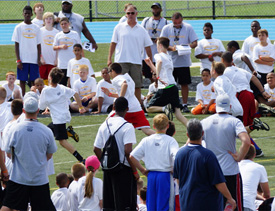 “Ben, Thank you so much for putting on the football camp for the kids. My husband and I were very impressed with how everything ran. My son had a blast and was so over the moon about catching a ball from you!

How awesome that was that you threw a pass to everyone of those kids!! We also watched you play quarterback for one of the games. What a memory for the kids! Great two days! Can’t wait till next year!! Keeping your knee recovery in our prayers!” — Lori Marshall


“They had so much fun!! Can’t stop talking about it. Both boys are bragging that they caught a pass by Big Ben!! Looks like we’ll be back next year!” — Rachel Haines, NC


“Thank you for all of the great charitable work you do!!!” — Burgh Man, via Twitter

“My son had a great time. Thanks to all who help with this wonderful event.” — Michelle Moore

“The kids did have a blast! That is my son behind Ben in the black shorts & black spats with his hands on hips. He was so excited when he saw this picture! Great job to all! It was so organized!” — Tammie Cramer 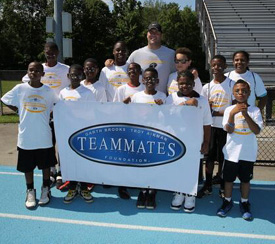 “Thanks to Teammates for Kids Foundation for sponsoring this program. Thank you Ben and Ashley for taking time from busy life to help these kids. Bless you both!” — Sue Chapman Butcher


“So glad I was able to be there this year. I was overly impressed with everything! What awesome people the entire Roethlisberger family is!” — Holly Mead


“The second day of Ben’s has come to a close and we’re headed back to Ohio. Once again Ben’s camp was a roaring success!! The Pro Camps people said out of all their camps this year that Ben’s was the largest with over 500 kids. The Pro Camps organization did an excellent job putting on this camp. It seems they continue to improve and streamline the event with each passing year. Ben’s love for the kids is very evident in the way that he goes out of his way to make each camper’s experience a great one. Once again he threw a pass to each camper! Ben gets excited for the kids as they try their hardest to excel and have fun! It’s very funny to watch him with the campers because it seems he’s really just a big kid at heart!

So we’ll spend some time looking at all the pictures and videos we took and hopefully look forward to next year’s camp!” — Anita Doddroe

You can see seven pages of photos from the 2-Day Camp right here!


*THANK YOU to everyone who shared their photos and comments from Ben’s Camp the past two days!