…included both a silent auction and a live auction with proceeds benefiting The Ben Roethlisberger Foundation, which supplies police and fire agencies throughout the country with K-9’s and rescue dogs, and The Make-A-Wish Foundation!

Teammates Brett Keisel, Heath Miller, James Harrison, and Charlie Batch were there to lend a hand, as was ESPN’s Merril Hoge. 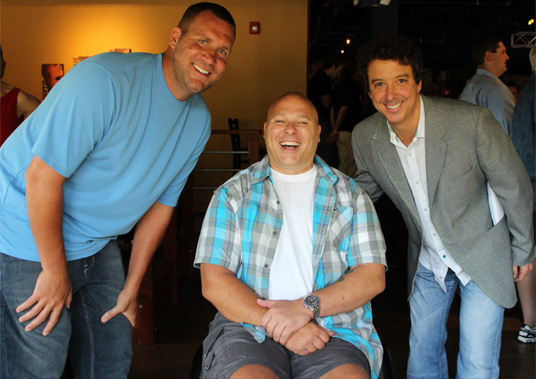 Ben and WDVE‘s Randy Baumann pose with Officer James Kuzak at Ben’s Fundraiser tonight at Jergels Rhythm Grille. On April 4th 2011, Patrolman Jim Kuzak and fellow officers of the Clairton Police Department answered a home invasion call in the City of Clairton. Upon arrival, Officer Kuzak was shot five times and critically wounded by two suspects as they fled the scene.

Sustaining gunshot wounds to the chest, arm and side which severely injured his lung and spine, Officer Kuzak is recovering from his injuries as he begins a journey down a very long road to rehabilitation and recovery.


You can read more about Officer Kuzak’s road to recovery here.

You can see more photos from the event here.

*Thank you to Teresa Varley and Steelers.com for the photo!

Tonight’s event was also about the children….


“I love the kids. I don’t think that is a secret. For them to have a wish to hang out with me and to be able to grant that is awesome.” — Ben, on the Make-A-Wish program.

Steelers.com‘s Teresa Varley was in attendance this evening at Ben’s first-ever Foundation fundraiser:

Steelers quarterback Ben Roethlisberger loves the joy he can bring to a child who he meets through the Make-A-Wish Foundation, a child who is battling through tough circumstances but can leave that all behind when they meet their favorite football player.

Now Roethlisberger is finding a new way to help those kids, by not just giving of his time to grant wishes, but also providing financial assistance to help make the wishes possible.

You can see how much he loves the Make-A-Wish moments when he meets the kids, many suffering from serious diseases but despite it all smiling with excitement when they meet him.

Nobody sees the impact Roethlisberger has on the kids more than Leigh Ann Lubarsky, the manager of program services at Make-A-Wish. Lubarsky accompanies the kids on their Steelers visits and knows what it’s all about.

“He brings a unique perspective because he grants wishes and he is good at that,” said Lubarsky. “He gets to make the wish happen. Now with the partnership with his foundation he takes it to the next step. He is a wish granter, but is taking it to the next level to make other wishes granted. It’s an amazing thing.”


More from Ms. Varley on the evenings festivities can be found here.