From the article & interview by J. Brady McCollough for the Pittsburgh Post-Gazette: 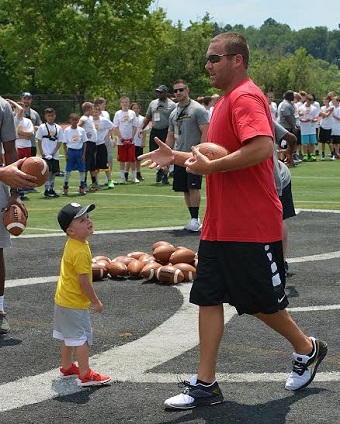 Today is his annual football camp for kids. It’s a great day for him because he doesn’t have to be guarded. The eyes of children don’t come with the filter of the past.

The image they see is of the Pittsburgh Steelers quarterback, Big Ben, No. 7, coming down to their level and doing drills, throwing them passes and yelling encouragement.

“Three…two…one…BEN!” they chant after the completion of each teaching session.

They see their hero as a father of three whose wife, Ashley, walks around the field at Bethel Park High School with their newborn, Bodie, strapped onto her shoulders. They see Ben’s father, Ken, going through drills with Ben, and his stepmother, Brenda, keeping watch on Ben’s two older children, Benjamin and Baylee. They see a family, maybe one that’s not so different from their own, enjoying Father’s Day weekend.

The kids see blond-haired Baylee running into her father’s arms to sit in his lap as he takes a break from camp. They hear him doing his goofy, high-pitched baby talk.

What do the campers’ parents see? Well, he can’t control that.

There is no way to know exactly who Ben is today, which is why he is careful about seeming like he’s trying to push a narrative. He would rather not try at all to win back the public than be viewed as a phony — a decision he made six years ago that still impacts him.

What is for sure is that his circumstances have changed: He’s a 34-year-old man who is building a home for his family, up near Sewickley. He loves being outside, whether it’s mowing the grass at home by himself or hunting, fishing or golfing with his dad and his tight circle of buddies. He goes to church regularly on Sunday mornings, even on some game days with later kickoffs.

Ben isn’t going to reveal much about his faith, because what good could come from him talking publicly about his relationship with Jesus Christ? His pastor, Jamie Kendrew of Christ Church at Grove Farm in Sewickley, wants him to start using his platform. He believes Ben has a beautiful, impactful story to tell.


You can read the full article & interview here.

Mr. McCollough asked, “What do the campers’ parents see?”. I can answer that! I collected just a small sample of their comments for a post after his camp concluded! — Erin