Home/News/Bensday Q&A with the media
Previous Next

From Teresa Varley’s recap at Steelers.com: 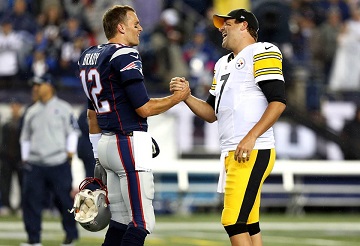 Ben Roethlisberger knows there will be a lot of hype on Sunday night, a lot of excitement as they celebrate the championship. And it won’t bother him, instead it will be something that can serve as a motivation to be that team next year.

“I think it’s cool to be a part of,” said Roethlisberger. “You go out there and watch it. You try and channel it to say that needs to be us next year. That’s the way I look at it. It’s the first game of the year. They are the world champs. We’re just trying to get to where they have been. It will be exciting for all of us. I know the crowd will be excited. Sunday Night Football, it’s not a one o’clock game. All those things add up to an exciting night.”

“No one’s got a win, no one’s got a loss. They are the world champs and we have to go to their place and do our best.”

Roethlisberger, like probably every player in the locker room, will have those first-game butterflies when they take the field. But it’s not nerves, it’s just that energy of a new beginning.

“I think it’s just as much excited nervous, as nervous,” said Roethlisberger. “We are going up there. I am sure they are dropping a banner or whatever they are going to do. What an exciting and awesome opportunity for us all.”