…have been nominated for the FedEx Air & Ground Players of the Year! 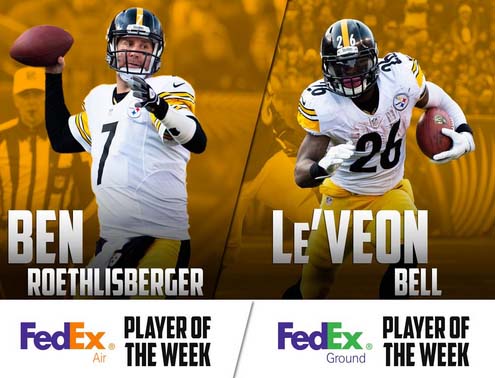 Roethlisberger had 32 touchdown passes this season and led the Steelers to an AFC North Championship. Roethlisberger tied Saints QB Drew Brees for the most passing yards this season (4,952 yards). He received his third Pro Bowl nod and with 39,057 career passing yards, he currently sits in 16th place on the all-time leaders list.

Bell finished the season as the AFC’s leading rusher and second in the NFL with 1,361 yards. Bell also had 854 receiving yards, joining Pro Football Hall of Famer Marshall Faulk (1999) as the only players in NFL history with 1,350-plus rushing yards and 850-plus receiving yards in the same season.


If you’d like to cast your vote, you can do so here.


FedEx will announce the 2014 FedEx Air & Ground NFL Players of the Year winners at the “4th Annual NFL Honors” awards show in Arizona, a two-hour primetime special to air nationally on January 31st on NBC, the night before Super Bowl XLIX.