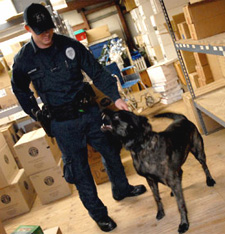 This year, Penn Hills police will benefit from a grant that will help fund an additional police dog for the department.

Chief Howard Burton said this is the second time his department has benefited from the foundation’s generosity.

“A couple years ago, we got a grant from them for a dog, Riggs, who is a Dutch Shepherd, about 4 years old,” Burton said.

Riggs has been with the department a little more than two years, and came on board as the result of a June 2008 grant from Roethlisberger’s foundation. He is partnered with Officer Ryan Walters (pictured above with Riggs).

“When you get a dog like this, you get the dog and you also have a handler, and you have to pay to train both. The cost is about $14,000 for all of that,” Burton said.

Fan Rick Kennedy of Lima, Ohio sent in a photo of his ‘Steelers Man Cave’ in progress.

“I would like to think I’m Ben’s biggest fan,” said Rick.

One only has to look at the overall theme of his bar to know he is certainly on the right track!


You can check out his photo here.