“It’s an awesome honor with this franchise’s storied history and tradition here. It’s humbling, and I have to thank all the guys that have caught balls from me. It’s too many to name, I thank them along with the line.” — Ben 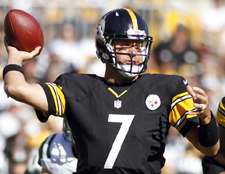 He surpassed the milestone on a 37-yard touchdown pass to Mike Wallace that withstood a replay review and gave the Steelers a 20-10 lead en route to a 27-10 win over the New York Jets at Heinz Field.