“I’m excited! You know, at least on paper, it looks awesome. But, you never know until you take the field and the bullets start flying. I’m really excited. We got some good guys on offense and defense to help add to a team that was good already.” — Ben, from the interview below. 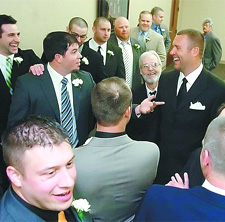 Ben jokes around with members of the 1999 state champion Tyrone football team prior to the start of Saturday’s ceremony. Photo: Gary M. Baranec

Roethlisberger said he phoned DeCastro to welcome him to the team, but DeCastro thought he was talking to a Steelers official who was handling his travel arrangements.

“He was saying, ‘Did you get those flight plans? Did you get those flight plans?”’ Roethlisberger, with his wife, Ashley, at his side, told an audience of 1,100 Saturday night at the 25th anniversary of the Blair County Sports Hall of Fame induction ceremony at the Blair County Convention Center. Roethlisberger said after a few seconds, DeCastro realized who he was talking to.


“I can’t wait once we get started to get on him about that,” Roethlisberger joked. “I had an idea [about the picks]. They kept me in the loop a little bit. When DeCastro was there, you got to take him. Some are saying he’s one of the best guards in college since Alan Faneca. We hope he can live up to the hype.”


You can read more from Mr. Frank’s column on last night’s event here.

From Philip Cmor, also of the Altoona Mirror, on the event itself: 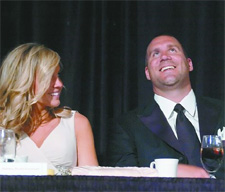 Family was a running theme on Saturday night at the Blair County Convention Center, as were community and, appropriately, history as the body celebrated the 25th anniversary of its first banquet before a record crowd of 1,100.

Even featured speaker Ben Roethlisberger of the Pittsburgh Steelers was on topic, talking about his father’s influence on his athletic career, the tragic loss of his mother in a car accident when he was 8 and the impact his marriage to former St. Francis University softball player Ashley Harlan – who sat with him at the head table – has had on his life; the Pro Bowl quarterback said how his most important ring wasn’t those from his two Super Bowls, it was the one from his wedding.


You can read more from Mr. Cmor’s column here.

And from a guest in attendance last night…

“Ben blew away my expectations. He not only signed my jersey but looked me in the eye and was flattered by my sincere compliments. He was polite, poised, and respectful. Born and raised a Pittsburgh girl I’ve always loved him as our Steelers quarterback. Him and his wife are incredible. I’ve heard mixed opinions on Ben but after tonight I am proud to say he is my idol. He represents Pittsburgh and makes every fan proud.

“I would be honored if I ever had another opportunity to interact with him. He is Pittsburgh Steeler football. Ben should be proud for what he has done for our community. Here we go Steelers, here we go!!” — Lindsey Keagey, who attended with her father, Matt.


You can see a photo of Lindsey posing with her newest prized possession here.