From Jeff Hathhorn, Sports Director at 93.7 The Fan:

Seven steps off the bus from the airport, I sat one of our bags down in the hotel lobby. Quickly a 35-to-40-year-old employee comes over to grab our luggage. We had arrived in Mexico just minutes earlier.

As he was putting a tag on our suitcases, Ernesto asked. “Where are you from?”

A smile grew on his face like running into an old friend. He said ‘ah yes’ and started pumping his fist.

“I love the Steelers,” Ernesto said. “What are we going to do about no Roethlisberger?”

Thousands of miles from Pittsburgh in a country where you would think football means soccer, here is Ernesto. A quick reminder of how international the Steelers brand is. 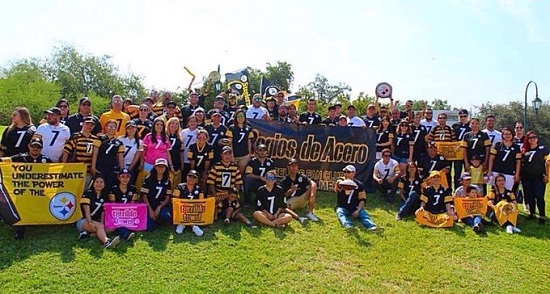 It appeared as though a lot of the English Ernesto knew revolved around the NFL and specifically the Steelers. He would go on to tell me how he watches every game, either requesting off or for a later shift on Sundays, unless of course, there is a night game.

He said he knew many people in Mexico that adored the black-and-gold. The impression he had of our entire region, if not our country, formed by his viewing 53 football players.

Three days later, at a family-style dinner, we start talking to the couple next to us. The man, 55-years-old or so, works for the University of Zurich. Yeah, the one in Switzerland. After discussing his job and beautiful country he asked where we were from.

“Pittsburgh,” I said as Leslie added, “it’s in the United States” just in case. There was no descriptor needed. Much like Ernesto, a smile grew on his face.

“I’m from Switzerland,” he repeated. “Ben Roethlisberger is Swiss. We (pointing to his wife) love the Steelers. Did you know Roethlisberger visited our country after one of his championships?”

I did remember his trip there as he went on to explain how he watches all the Steelers game. The one o’clock starts are seven pm starts in Zurich, 10:15p for the later afternoon games. He even watches the night games, but laughed he may go into work a little late. The university employee also noted he’s not the only Steelers fan in Switzerland. He has dual citizenship in Germany and said many in Munich root for the Steelers.

This is not a revelation, most know of the Steelers popularity. What was cool for me was as we spend 24/7 picking apart every detail regarding this football team. They love it for what it is, three hours of enjoyment on a Sunday, Monday, occasionally in Switzerland, a Tuesday.

Yes, the Steelers have holes to fill. Yes, they haven’t won enough to our liking. Yes, we will pick apart their draft like it was a matter of national security.

It’s good to remember there is still an innocent fellowship to following the Steelers, no matter where you are.


You can read the rest from Mr. Hathhorn here.