“I enjoy this rivalry. I know it sounds crazy but I enjoy two of the best teams going at it.” — Ben

During his regular Wednesday interview with the media, Ben was asked about the game this weekend, the new faces on the Ravens this season…and one very familiar face!

From Matt Vensel, The Baltimore Sun: 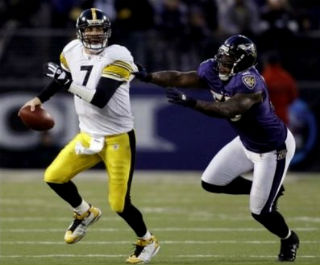 Terrell Suggs has hammered Ben Roethlisberger many times over the past decade. In fact, no player has sacked Roethlisberger more often than Suggs, who has topped Big Ben 15.5 times during his career.

Yet, despite the punishing hits that Suggs has given him over the years, Roethlisberger stood in the Pittsburgh Steelers locker room Wednesday and tossed verbal bouquets in the rush linebacker’s direction.

Roethlisberger added, “He doesn’t have a dirty attitude like some of these young guys coming into the league at linebacker and [other] defensive players have. He has a respect for the players and the game, and I respect that.”

Minutes before Roethlisberger held court in the Steelers locker room, Suggs had told Pittsburgh reporters on a Wednesday conference call about how much respect he has for the way the quarterback plays.

“This guy won two Super Bowl championships. He played in three,” Suggs said. “The guy is a winner. I think I like that he has his own style. He’s not like those other [top quarterbacks]. He’s Big Ben. You can’t do anything but respect a guy like that and his physical play.”


You can read more from Mr. Vensel here.

You can watch & listen to more from Ben’s interview here! You can read the transcription here.