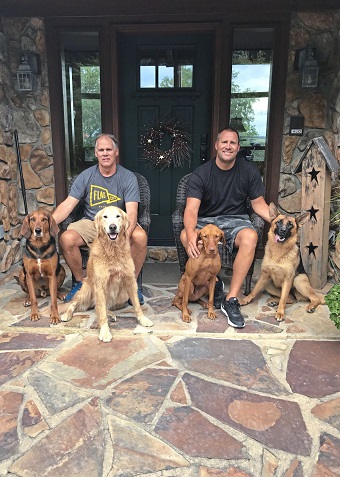 A Steelers quarterback never expects a friendly reception in Baltimore, even when he’s on vacation.

“He walked up to me and said, ‘I’m a K9 officer and I have one of your dogs. I just wanted to say how much it meant to me,” Ben Roethlisberger recalled.

In the 11 years since the Findlay, Ohio, native bought a police dog for his hometown, the Ben Roethlisberger Foundation (https://bigben7.com/the-ben-roethlisberger-foundation) has purchased and paid to train 130 German shepherds and Belgian malinois for police departments in Western Pennsylvania, Baltimore, Cincinnati, Cleveland and many other communities not in the AFC North Division.

People who wouldn’t think of rooting for a Pittsburgh team cheer Mr. Roethlisberger’s charitable mission. And local K9 officers, well, they don’t hide their gratitude for the man who’s given them some of the best partners they’ve ever had.

Pittsburgh Police K9 Officer Philip Lerza gets to thank Big Ben for Beny whenever the handler and his dog work the players’ entrance at Heinz Field before Steelers home games. The foundation paid for the 75-pound-German shepherd-Malinois mix in February 2014 after Rocco, Officer Lerza’s previous partner, was killed on duty.

“Staying busy with Beny helped me get through it. It helped my whole family,” Officer Lerza said.

That’s because police dogs go home with their partners, but never really go off duty.

In May, Sharpsburg Police K9 Officer Jeffrey Hussar watched proudly as his partner, Jango, the borough’s first police dog, was sworn in. A grant from the Roethlisberger foundation plus local donations paid for the 2-year-old German shepherd, his training and a vehicle.

“He’s very good with his nose,” said Officer Hussar, who uses Jango for drug sniffing and patrol work. Last Saturday, they responded to a fight at a Sharpsburg home that escalated into a standoff between police and a man with a knife. Jessie Lee Glover, 39, allegedly threatened to kill police and the dog. Officer Hussar said he removed Jango when the suspect fled into the house.

“I was worried about our safety and the dog’s safety,” he said.

Mr. Glover was later removed from the house by a SWAT team and charged with eight felonies.

In nearby Ohio Township, K9 Officer Eric Wallace has his own little family of police dogs — 11-year-old Rico, who retired in July, and 17-month-old Larry, his partner since early September. Larry, a German shepherd bred in the Czech Republic and funded by the Roethlisberger foundation, runs to the door when he sees his partner putting on his uniform. “He jumps three times like he’s on a springboard,” Officer Wallace said.

On the job, this drug sniffer is “precise and methodical.” But once he gets home, the puppy in him erupts once more. Larry romps with Rico and Bruno, a standard poodle that belongs to Officer Wallace’s girlfriend, Sarah Bergman.

Both police dogs enjoy the occasional “blueberry facial” and nail trim at Ms. Bergman’s Doggie Do’s Hair Salon. One day, when Officer Wallace and Larry dropped in to visit, Ashley Roethlisberger, Ben’s wife, was picking up one of their dogs after grooming. She was delighted to learn Larry is one of Ben’s dogs.

“She said, ‘We don’t get to meet them very often,’” Officer Wallace said.

Dogs run in the family

Mr. Roethlisberger credits his father, Ken, for his lifelong love of dogs. Tucked in a family album is a picture of Baby Ben with Brandy, the family’s golden retriever. Dogs were more than just pets; father and son used them to hunt quail, pheasant and ducks in Western Ohio.

Today, Ben and Ashley Roethlisberger and their three children live with two dogs: Remy the vizsla and Kota, a German shepherd. Ken and Brenda Roethlisberger, who live in Beaver County, have a coonhound named Hank and Sam, a golden retriever. They lost Harley, an 8-year-old Rottweiler, this summer.

“I usually keep his dogs when they’re out of town and he takes ours,” Ken Roethlisberger said.


You can read Mr. Kirkland’s full story on Ben & his foundation here.