“Brett Keisel has left an indelible mark on the Pittsburgh Steelers”

“Brett Keisel has left an indelible mark on the Pittsburgh Steelers”

From Scott Brown, at ESPN.com: 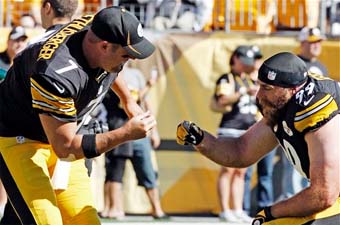 Keisel is one of the last survivors from the defenses that led the Steelers to a pair of Super Bowls in a four-season span and served as a bridge to the dynastic teams that won four world championships from 1974-79.

The 2002 seventh-round draft pick developed into one of the better 3-4 ends in the NFL and thrived, despite playing a position that doesn’t get a lot of glory while on a defense brimming with star power.

Keisel became beloved by fans as much for his steady play as for the persona that started when he grew a beard thick enough to catch Steelers’ owner Dan Rooney’s attention. It happened in 2010, when Keisel decided to stop shaving while the Steelers made their run to a third Super Bowl in six seasons.

Rooney had been serving as the U.S. Ambassador to Ireland when he saw Keisel’s beard on a visit to Pittsburgh. He basically asked Keisel what in the name of Grizzly Adams he was doing, and Keisel offered to shave. Rooney, however, bemusedly signed off on the beard, and it became its own entity. It now has multiple Twitter accounts and has helped raise hundreds of thousands of dollars for Children’s Hospital of Pittsburgh.

Few Steelers players did it better or longer than Keisel, on and off the field.