Football might be the ultimate team sport, but the NFL is dominated by larger-than-life talents — those players who, through sheer force of skill and personality, seem able to single-handedly drive their squads. A player like that can become everything to his organization, defining its identity and dictating its fortunes. In other words, he becomes the face of the franchise. 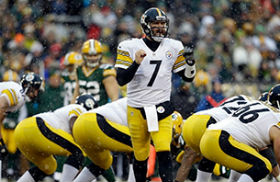 Whenever a quarterback leads a team to three Super Bowl appearances — including a pair of victories — he deserves to be in the conversation as one of the league’s true franchise players.

Roethlisberger has keyed much of Pittsburgh’s success during his decade with the team. Over the last few years, he carried an offense that struggled along the line and lacked a consistent running threat (until Le’Veon Bell began to produce as a rookie last season). Additionally, Roethlisberger has been a clutch performer in big situations, posting 32 game-winning drives and 23 fourth-quarter comebacks in 10 seasons.

Roethlisberger’s ability to provide poise when the Steelers need it most only confirms his status as The Man in The ‘Burgh.


You can read the rest of Mr. Brooks’ column here.