Antonio Brown and Le’Veon Bell were honored last night at the 101 Awards Banquet!


From Randy Covitz at the Kansas City Star: 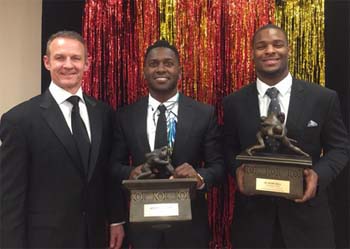 Pittsburgh wide receiver Antonio Brown, who led the NFL in receptions (129) and receiving yards (1,698), and running back Le’Veon Bell, the AFC’s leading rusher (1,361 yards), shared the AFC Offensive Player of the Year award, the first time that’s happened in the 101 Awards’ 45 years.

“We couldn’t do it without a quarterback and the other 10 guys on the field,” Brown said, “and we’re disappointed that Ben (Roethlisberger) isn’t here because he’s the one who gets it started. But the guy to my left (Bell) … I wouldn’t want to share this with anyone else.”


You can read more about the banquet here.


Congratulations to both men, and to Coach Bruce Arians as well, named NFC Coach of the Year – all three awards are well-deserved!