Home/News/Brown: Pittsburgh Steelers ownership at a glance
Previous Next

Highlights from Scott Brown’s column at ESPN.com this afternoon: 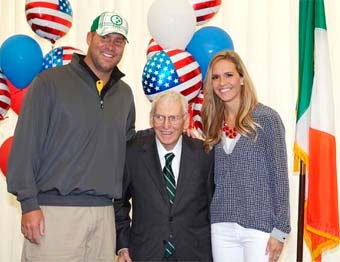 Art Rooney, Dan’s father, paid the NFL a $2,500 franchise fee to found the team in 1933, according to the Steelers. In 1975, he officially turned over day-to-day operations to his oldest son, Dan, who became Steelers president.

Art Rooney passed away in 1988 and passed the Steelers down to his five sons — 18 percent each — with the McGinley family owning the other 10 percent. Dan Rooney continued to run the team as president and two decades after his father’s death he kept the Steelers in the only family that has ever owned them.

Ownership philosophy: Puts a premium on stability and building through the draft. Strong drafts led to the Steelers playing in three Super Bowls, winning two of them, from 2005 to 2010.

Defining moment in ownership tenure: The Steelers were leaning toward taking Arkansas offensive lineman Shawn Andrews with their first-round pick in 2004 after quarterback Eli Manning and Philip Rivers were selected before No. 11 overall. Rooney did not want the Steelers to pass on a potentially great quarterback, something they had done with Dan Marino in 1983. Rooney steered the conversation toward Ben Roethlisberger as he recounted in his book, “Dan Rooney: My 75 Years with the Pittsburgh Steelers and NFL.” The Steelers drafted the Miami (Ohio) quarterback, who became a starter in the third game of 2004 because of an injury to Tommy Maddox and went 13-0 in the regular season. Roethlisberger has been entrenched as the Steelers’ quarterback since and led them to a pair of Super Bowl wins — Pittsburgh’s first world championships since the 1970s.